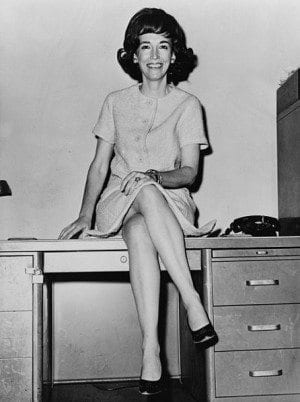 Helen Gurley Brown, the longtime editor of Cosmopolitan magazine, author and driving force for women’s sexual independence, passed away Monday at the age of 90.

Helen Gurley Brown served as editor at Cosmopolitan magazine from 1965 to 1997, but before her pioneering work with Cosmo, she authored the controversial but highly influential 1962 advice book, Sex and the Single Girl.

Sex and the Single Girl emphasized sexual and financial independence for women and laid the ground work for a generation of women who flaunted their sexuality as much as their independence. Brown drew criticism from feminists and conservatives alike. Feminists alleged that her beliefs hindered the feminist cause, whereas conservatives responded with disgust for her liberal view of women’s sexuality.

“What she did was combine feminism with this sexy package and kittenish style,” said editor in chief of Allure magazine, Linda Wells. “It seemed anti-feminist but it was ahead of its time. Her influence was felt in the frankness with which she approached sexuality, in the way she thought women should own it. And there was no one flirtier. She would flirt with men, she would flirt with me!”

In a 2004 interview with Booth Moore of the Los Angeles Times, Helen Gurley Brown spoke of the impetus for her work at Cosmopolitan. “We discussed what we wanted, which was the most gorgeous girl in the world, ravishing, sensual and sexy, but in good taste and friendly, because at the time girls were looking very snippy and haute.

“I wanted to show bosom,” Brown added. “I knew women wanted to look at bosom as much as men did, to see how they compared. This was before the times of breast augmentation, and Francesco and Sean always showed bosom. They used bobby socks, breast tape, baseballs, whatever they had to.”

“She was the first woman to say you could have it all – and by that she meant a career AND a man AND a hot sex life,” said Bonnie Fuller, the celebrity editor who succeeded Helen Gurley Brown at Cosmopolitan in 1997. “She was a visionary. She created the modern woman.”

New York City Mayor Michael Bloomberg called Brown “a pioneer who reshaped not only the entire media industry, but the nation’s culture. She was a role model for the millions of women whose private thoughts, wonders and dreams she addressed so brilliantly in print.”

Hugh Hefner, the Playboy founder and publisher and good friend of Brown, called her “a very important and independent voice who related to the changing of women’s roles.”

Cosmopolitan’s busty models, sex quizzes and tips for landing a man had profound influences on American culture, resulting in everything from Miracle bras, the popularity of plastic surgery and HBO’s Sex and the City. The sexy-girl-next-door archetype Cosmo developed during Brown’s time as editor lives on with modern celebrities gracing the cover and influencing young women all over the world.

“The Cosmo cover is so recognized throughout [the] world,” said Wells. “The people change, the language changes, but the mission at heart, the identity is still recognizable. [Brown] made sexy women something that could appeal to women, and that wasn’t the case before her. Sexy women were for men and housewives or clean-cut college types like Ali MacGraw were for women. That was subversive and powerful.”

Looking back on her time at the magazine, Brown reflected, “I would want my legacy to be, ‘She created something that helped people.’ My reader, I always felt, was someone who needed to come into her own.”