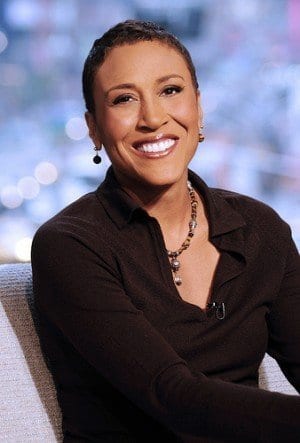 Good Morning America co-host Robin Roberts announced halfway through Tuesday’s program that she would be leaving the rest of the morning up to her co-host to run. Robin Roberts suffers from myelodysplastic syndrome and is scheduled for a bone marrow transplant in the coming weeks.

Roberts’s planned donor is her sister.

Robin Roberts announced to her colleagues, “Well a full disclosure here, I’m not feeling too well,” adding, “I’m going to take a little time off, just to get some vacay. I’ll see you in a couple of weeks.”

Roberts handed the rest of the show over to her co-host, Josh Elliot. Elliot made sure to keep the energy high and light in the studio by joking about Roberts’s difficulty with speaking due to a sore jaw.

“We’re going to miss you, but we do appreciate the Jimmy Cagney impersonation before you leave,” Elliot said.

Robin Roberts made her breast cancer public in the past five years, and revealed her MDS earlier this summer.

While Robin Roberts’s surgery is not scheduled for another few weeks, her vacation is scheduled for just around now. She decided to take the vacation at home during her hiatus from Good Morning America.

Robin Roberts also assured her loving fans that she is doing well, and thanked them for their support.

“Thanks for all the prayers & well wishes…same to you. Never appreciated vacation more. XO,” said Robin Roberts.