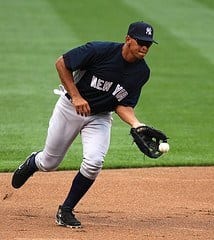 Gio Gonzalez and Alex Rodriguez, among others, have been linked to a clinic in Miami that distributed performance enhancing drugs banned by the MLB, according to a shocking story that appeared in the Miami New Times Tuesday. The players’ names were found in a notebook kept by Anthony Bosch, who ran the clinic in question and who has been investigated by the DEA and linked to steroid distribution in the past.

Many of the players implicated in the new findings are no stranger to scandal. Alex Rodriguez, Melky Cabrera and Bartolo Colon have all admitted to using performance enhancing drugs in the past, and the latter two have served 50-game suspensions for the violations. Rodriguez admitted to using steroids in 2003, but maintained that he hadn’t touched them since. But new details are emerging that cast doubt on that claim, as well as implicate several squeaky-clean players, like Gio Gonzalez, of using the banned drugs.

The Miami Times obtained a notebook and a spreadsheet document from a former employee of the clinic, which closed last month. The clinic, named Biogenesis, has been accused of distributing performance enhancing drugs to professional sports players in the past, although a DEA investigation was inconclusive. Among the names are players who previously had not been suspected of using PED’s.

Gio Gonzalez, the Washington Nationals pitcher who was in contention for the 2012 Cy Young award, had his name appear five times in the documents obtained by the Times. He issued a denial over Twitter shortly after the allegations surfaced.

“I’ve never used performance-enhancing drugs of any kind, and I never will,” Gonzalez said. “I’ve never met or spoken with Tony Bosch [the owner of the clinic] or used any substances provided by him. Anything said to the contrary is a lie.”

Gio Gonzalez’s father was reportedly a client of the clinic, which confuses things further. He confirmed that he went to the firm for help losing weight, but denied that his son was a client.

“My son works very, very hard, and he’s as clean as apple pie,” the father of Gonzalez said. “I went to Tony because I needed to lose weight. A friend recommended him, and he did great work for me. But that’s it. He never met my son. Never. And if I knew he was doing these things with steroids, do you think I’d be dumb enough to go there?”

The clinic’s documents also mention $4000 worth of a drug being sold to Texas Rangers’ outfielder Nelson Cruz.

Also implicated is Yankees third baseman Alex Rodriguez, who has previously said he hasn’t used PED’s in 10 years. But his name appears in the clinic’s notebook dated from the Spring of 2012, who apparently bought $4000 worth of a substance called Sub-Q. Later in the notebook, Sub-Q is identified as a mixture of HGH and IGF-1, both performance enhancing drugs that are banned by the MLB.