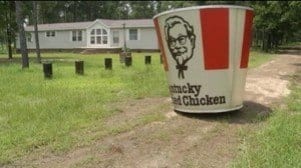 Despite how it may look, Aleena Headrick is not a cultivator of giant KFC buckets. The Georgia resident discovered the large container in her front yard last Thursday; regrettably, there was no chicken surprise inside.

The giant KFC bucket is seven feet in diameter with red-and-white stripes. It has an illustration of a bearded man on it whom fast food historians refer to as “The Colonel,” no one has found a military record of his service.

The side of the giant KFC bucket reads “Kentucky Fried Chicken,” which inside experts allege to be the same restaurant as KFC.

Headrick’s response was to post pictures of the giant KFC bucket to the Facebook, turning it into a roadside attraction bringing joy to all fried chicken enthusiasts that passed by.

It was later revealed that the giant KFC bucket is a 40-year-old store display that Headrick’s landlord Freddie Taylor had purchased.

It would seem that Taylor is a big fan of large chicken containers, as he plans on permanently displaying it in Headrick’s yard. Headrick seems to be totally fine with this, which is good because it sounds like the giant KFC bucket was going to be there no matter what.

The photos of the giant KFC bucket circulated over the internet and even made their way to KFC’s corporate offices. KFC has offered to throw the Headricks a free fried chicken picnic, because everyone wants their home to be turned into a fast food commercial.

KFC has not commented if they will bring 7-foot containers of dipping sauces.