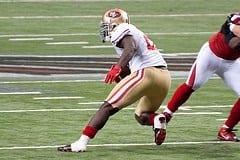 Frank Gore has had a lot to think about as he plans with his team for the Super Bowl on February 3. Now the 49’ers star running back has another weight on his mind: the NFL’s stringent dress code. Frank Gore was fined $10,500 last Sunday for wearing his socks too low, an apparently serious uniform violation.

The NFL requires players to wear their socks up to just below the knee, where the uniform pant leg starts. Frank Gore, during Sunday’s NFC Championship game against the Falcons, wore his socks only ankle high, leaving about a foot of bare skin between his feet and his knees.

The casual viewer likely didn’t notice, but the fashion police did, and now Frank Gore is paying his second fine of the season to the tune of $10,500. Gore, who made $4 million during the 2012 season and $40,000 just for appearing in last Sunday’s Championship game, didn’t seem too concerned about the money.

The NFL usually doesn’t fine players unless they have been previously warned of their offense. Although Frank Gore was fined earlier this season for a separate dress code violation, it’s likely Gore was notified he was wearing his socks too low and continued to wear them anyway.

“When you’re playing, you don’t think about it,” Gore said. “You’re trying to win.”

The socks didn’t hinder Frank Gore’s play, as he ran for two touchdowns in the game Sunday. The 2012 season saw Gore run for eight touchdowns and over 1,200 yards—his sixth 1000 yard season with the 49’ers.

Gore holds many of the 49’ers historical running records, including most touchdowns (51) and most yards (8,839).