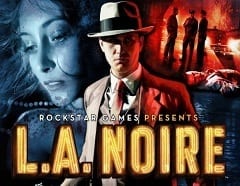 What to expect from Rockstar’s gritty 1940s crime adventure

Rockstar and Team Bondi’s “L.A. Noire” may very well be the most expensively produced game in history. It’s also set to make history with its groundbreaking facial animation technology and its superb narrative. But if you’re expecting standard Rockstar fare, you may find yourself being either sorely disappointed in, or helplessly in love with, this gritty 1940s crime adventure drama. Read on for the five things you may love – or hate – about “L.A. Noire”.

1: THE UNCANNY VALLEY
In the field of robotics and 3D animation, The Uncanny Valley revolves around that creepy feeling you get when a robot mimics a human with up to 90 percent accuracy. For years, thousands of video game developers have strived to reach a level of realism with their fictitious, computer-animated characters. Team Bondi, the creative force behind “L.A. Noire,” is the first to accomplish it. The breakthrough technology behind this facial animation isn’t just an expensive achievement, it’s a revolutionary step forward in game design. For all intents and purposes, the myriad of emotive characters in “L.A. Noire” are humans, and their expressions cannot be distinguished from an actual person. In fact, you may discover an internal logic loop inside your brain as it fights to determine if what you’re watching is occurring in the real world or a digital one. From a hard swallow after telling a lie, to furrowed eyebrows, facial tics and even squinting eyes that can be measured in millimeters, this isn’t just the closest games have come to being interactive movies — this is an interactive movie.

2: IT ISN’T “GRAND THEFT AUTO: COPS”
This may come as a disappointment to some, but credit goes to Rockstar for not being afraid to bust out of their own mold, especially when you consider the inherent sales risk involved. While it can be argued that “Red Dead Redemption” was merely “Grand Theft Auto with horses,” some sites describe “L.A. Noire” as “Grand Theft Auto: Law Enforcement.” For better or for worse, this couldn’t be further from the truth. “L.A. Noire” retains a razor sharp focus on its narrative, even encouraging you to let your partner drive in order to arrive at the next crime scene more quickly. While the occasional street crimes can optionally divert you from the next plot development, they still don’t encourage a true sandbox/open-world style of gameplay. Interaction with random citizens is almost non-existent, and the game prevents you from pulling a gun unless absolutely required by the storyline’s events. And sure, you can smash into traffic but be prepared to get a sinfully low score at the end of the case. At every turn, Rockstar and Team Bondi relentlessly direct your attention to the writing, the acting, and the inherent adventure. It’s a refreshing change.

3: UNDENIABLY VINTAGE MUSIC
Time and time again, Rockstar has procured a wealth of period-appropriate music for its “Grand Theft Auto” series, but they’ve outdone themselves with “L.A. Noire”. The soundtrack features 1940s jazz perfect for a dusty bar or suspenseful caper. More importantly, it exudes such a vintage sound because it is vintage. It literally sounds like Rockstar traveled back in time to the Los Angeles of the 1940s, scouted the clubs and bar scene and brought back master recordings of the music that knocked their socks off. It’s so moody and stirring you may even find yourself becoming a fan of the slick instrumental jazz of that era.

4: BLACK & WHITE IS THE NEW 3D
While companies like Sony and Nintendo are pimping out 3D visuals, Rockstar has reversed their thinking entirely. Buried in the options menu is an option to play through “L.A. Noire” in black and white. Sure, you’ll miss the golden handles that indicate buildings and rooms you can enter, but it completes the illusion that you are Cole Phelps, a straight-laced detective solving crimes in a perfectly recreated seedy version of 1940s Los Angeles. Suddenly, the dialog sounds more authentic, and you’re transported back to this 8 square miles of pre-freeway, noir-inspired slice of California. Techophiles will probably hate it, but it’s the only way to play.

5: YOUR ABILITY (OR LACK THEREOF) TO DETECT A LIE
Ask yourself, “Self, why can’t I ever detect that idiot who always bluffs during Saturday night poker?” Ask yourself if you’ve been lied to by a significant other, only to discover the truth days, months, or years later. If you can’t distinguish truth from fiction in real-life, don’t expect to bust chops in “L.A. Noire”. Remember that outstanding facial animation? It’s so convincing that you have to carefully study the faces and body language of witnesses and suspects to catch a fib. Does the timing of their wording seem off? Are they using less hand gestures than normal? Are they using just their mouth to smile, or is their whole face lighting up with happiness? Does their neck really itch, or are they nervous as hell? Are their eyes fleeting back and forth at an unusual speed? These are things to consider when asking a simple question, and the simple fact that you can detect a lie by studying their mug is a leap forward in video games. Then again, it could also be your undoing, resulting in a scolding from your Captain so intense that it scars you for life.

Previous ArticleJapanese camp established for young adults to lose their virginityNext ArticleRundown Guide for May 23, 2011