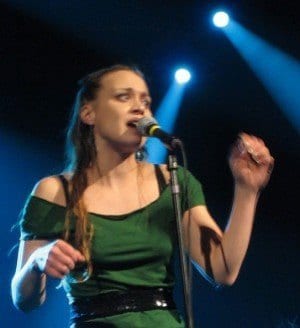 Singer/songwriter, Fiona Apple, was arrested Wednesday on charges of possessing hashish in her tour bus. Apple was stopped at Border Patrol in Sierra Blanca, TX where a drug-sniffing dog detected marijuana.

According to Rusty Flemming, Hudspeth County sheriff’s office spokesman, “Apple had a tiny amount of pot and hash.” Although being in possession of a small amount of marijuana is a misdemeanor, hashish in any quantity is a felony in the state of Texas.

Fiona Apple performed at the Greek Theatre in Los Angeles last Friday and was set to play at the Moody Theatre for Austin City Limits Live tonight. There is no information yet on how the singer’s arrest could affect the show. She is currently being held at a jail in Hudspeth County. So, it’s not looking good.

Many have taken this opportunity to poke fun at the singer’s hit song, Criminal. Us Weekly wrote “Fiona Apple feels just like a criminal these days…but for very different reasons than the ones she got famous singing about.”

Fiona Apple isn’t the only celeb to be caught at the very same stop. Willie Nelson, Snoop Dogg and Armie Hammer have all been arrested for drugs in the past at the same stop.