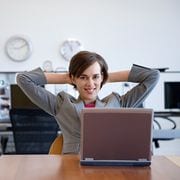 Look online to find the career of your dreams

Remember those childhood dreams of what you wnated to be when you grew up? I wanted to be a fireman for years as a young lad, but then I hit adolescence and impressing the girls became the only focus. Along with teenage acne and bum fluff, came the ambition to be a lead singer in a rock band, or sometimes a world famous rock band, or sometimes a world famous movie star. Of course, after the dreaming came to an end, the stark reality of finding a career that one could realistically aim for began to set in. It was time to start mapping out the future as many of us trudged our way through the educational system.

I don’t know about you, but finding a career that I had a genuine interest in became a real challenge. First I was looking at potential jobs that were financially rewarding, but soon realized that with so much of one’s life spent in the workplace, it was really important to throw some job satisfaction into the decision-making process.

University became a real headache. I didn’t just want to get a degree for the sake of being educated even though that in itself does not open up the doors of opportunity. No, I wanted to major in something that I had a genuine interest in, and a subject that could become part of a fulfilling career.

I found that career counselors were not much help with their conservative portfolio options. They were too mainstream in their approach to vocation. It was all about corporate ladders with them, starting at the bottom and working your way up. You know, I’ve lost count with how many adults I’ve overheard who do nothing but whine and moan about their work, their salary, the boss and their colleagues. Heck, you spend more conscious hours with these folks than you do with your own family, so finding a career that one loves, or at the very least likes, is imperative.

In the end, I found my options independently online. They don’t call the Internet the Information Super Highway for nothing. With an absolute plethora or career opportunities to read about, the world literally becomes your oyster, and providing you have the grades, you will find interesting and alluring job opportunities you never knew existed. Our own resources section has career profiles, tips for creating resumes and cover letters and tips for interviews and the job search in general.

With this so-called globalization that we’ve seen in recent years, there are also many international job opportunities available for qualified personnel. If you fancy a stint overseas, then you may wish to look at opportunities that fit the bill. Engineering, the medical profession, economists, teaching are just a handful of positions that are always in high demand no matter where you go.

If you find yourself having difficulties in choosing and/or deciding what you want to do, there are many websites online that have career questionnaires.

So don’t let finding a career become a stressful and daunting prospect. Use those online tools at your disposal, and open your eyes to the wonderful world of opportunity.