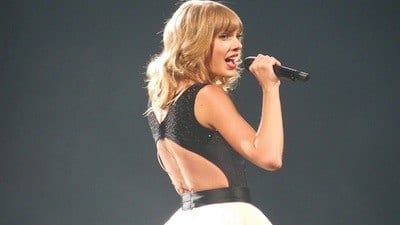 The video for Taylor Swift’s Bad Blood ft. Kendrick Lamar debuted yesterday, and I’ve already watched it seven times. Taylor Swift and Co. (which includes more than a dozen powerful ladies in entertainment) are stellar as a team of all-girl fighters.

The video, which is quickly picking up steam, is notable not only for its star-studded cast, but for the superhero-like quality and the neo-noir style. Media outlets and fans alike have been sharing the video, with one fan in particular issuing a challenge to Marvel about the lack of female superheroes in action.

Marvel has been publicly taken to task for the CEO’s claims that female superhero movies just aren’t profitable. What’s more, the female characters who are written into the Marvel universe are often given less dimension than the male characters, and frequently just prove to be support for the male superhero development. Jen Yamato at the Daily Beast writes an excellent explanation of Marvel’s skeevy and demeaning treatment of Black Widow through various films.

But as The Hunger Games, the newest Supergirl series, and Taylor Swift are proving, there is hope yet. Female superheroes (and hey, why not supervillans, too?) aren’t only a powerful direction to go in, but a profitable one as well.