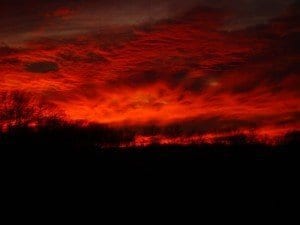 ‘Evil Dead’: An unreview of the undead musical, coming to Chicago soon.

Zombies are dominating popular culture with a vengeance and, according to a 24/7 Wall Street estimation, are contributing over $5 billion dollars to the world economy as of 2011. The walking dead’s social relevance allows for a myriad of zombie movies, zombie comic books, zombie video games, and now, zombie rock musicals.

Based on the American horror film franchise, “Evil Dead The Musical” opened as a workshop in 2003 in the back room of a small bar in Toronto. Since then, bloodthirsty theatre companies all over Canada and the US have been quick to perform the self-proclaimed cult classic. By nature of all things zombie, this campy musical adaptation explores zombie phenomena, the ideas behind a post-apocalyptic world, and the postmodern obsession with creatures that reflect the dark, abysmal truth of the human condition. But, way more importantly, blood.

Zombie enthusiasts will be happy to hear that “Evil Dead” will (invade?) play at the Broadway Theatre Playhouse from Thursday, September 23 to Sunday, October 23.  Tickets are on sale now. To order tickets, or for more information, follow the link: http://broadwayinchicago.com/.

A worthy adversary of “Rocky Horror Picture Show” should there ever be one.