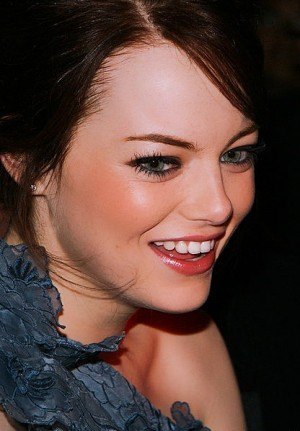 Emma Stone did not win any awards last night, but that didn’t stop her from stealing the show.

On the red carpet, Emma Stone dazzled in an eye-catching floor length gown with a high-neck bow, a trend on the designer runways right now. When asked about her dress, she replied, “Well it’s by Giambattista Valli, it’s fuchsia, and it’s got a bow!” Stone wore her hair in a simple side-swept plaited twist that complimented her winged eyeliner and rosy lips perfectly.

While many skits at the award show fell flat, Ben Stiller and the overly enthusiastic Emma Stone got lots of laughs while presenting for Best Visual Effects. “This is my first time presenting,” said Stone, to which Stiller wearily responded “Yeah, I know.”

As Stiller tried to read the list of nominees, Stone interrupted saying, “Wait, wait, let’s stop rushing. We should have some banter. Where you act cocky and I shut you down and you say I look pretty and I say ‘no chance funny boy’!”

Stiller continued to try and read the nominations, explaining to the actress: “You don’t want to be the presenter who tries too hard.”

“What do you mean, like a guy who would dress in full Avatar makeup or something? I’m surprised you’re not in a Planet of the Apes outfit,” Stone retorted.

When asked about the popularity of “The Help,” Stone responded, “I think it’s probably something that everyone can relate to… It’s really about friendship, and about being the underdog, and bonding with people in the face of adversity. And I think everybody can kind of relate to that.”

Stone did not receive a nomination for her work in the movie, but actress Viola Davis was nominated for Actress in a Leading Role for her portrayal of Abileen Clark, and Octavia Spencer won the award for Best Supporting Actress for her role in “The Help.”