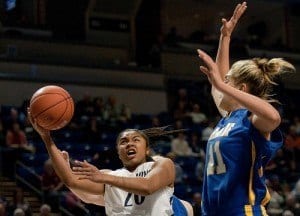 Delle Donne helped the team advance to the Sweet 16 of the NCAA women’s tournament for the first time, making school history. She has a total of 3,006 points under her belt through her career with the Blue Hens.

Aiding Delle Donne were Trumae Lucas, scoring 20 points, and Danielle Parker, scoring 14 points and 13 rebounds, according to the Associated Press.

“I wish Delaware good luck when they get on a neutral court,” North Carolina coach Sylvia Hatchell said.

The Blue Hens will go on to play second-seeded Kentucky in the Bridgeport Regional semifinals Saturday.

“I don’t think I’ve wanted anything more than this win, and that’s saying a lot,” Delle Donne said of the game against North Carolina.

“This is without question the greatest victory in Delaware sports history,” Coach Tina Martin said.

North Carolina’s two leading scorers were on the bench due to fouls.

According to ESPN, Delle Donne was diagnosed with Lyme disease during her second season with Delaware. She came back from the disease and started playing again.

At the North Carolina game, Delle Donne scored a three-pointer at the buzzer.

“I honestly think that three-pointer was one of Elena’s biggest shots of her career,” Gene Delle Donne, her older brother, said.