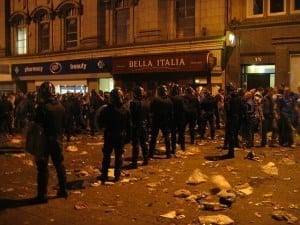 The blame for Thursday’s Egyptian soccer riot is falling on the country’s military rulers. The soccer riot took place not on the field but in a city’s stadium exit just north of the Egyptian capital. Fans of the Egyptian soccer club ran from supporters of the night’s opposing team, whom charged them with knives, clubs and stones. The incident turned deadly when the fleeing fans encountered a lock gate at the end of the exit.

“The lights went off. The doors of the corridor were locked and sealed with a chain,” stat Sayyed Hassan, a 22-year-old, who suffered a broken leg during the riot, reports the Wall Street Journal.

With 74 people crushed, suffocated or stabbed to death, the Associate Press, reports that this was the world’s worst incident of soccer violence in the last 15 years.

“Layers of people” were “stuck over each other because there was no other exit,” Ahmed Ghaffar, one of the visiting Al-Ahly fans tweeted on Thursday. “We were between two choices, either death coming from behind us, or the closed doors.”

The Egyptian soccer riot commenced exactly one year after the most violent day of the 18-day anti-Mubarak uprising. The 2011 uprising had been spurred on by the outrageous police actions during Hosni Mabarek’s era of emergency law. Mabarek had served as the Egyptian president from 1981 to 2011. The Al-Ahly soccer club fans had been in complete opposition of Mabarek’s rule.