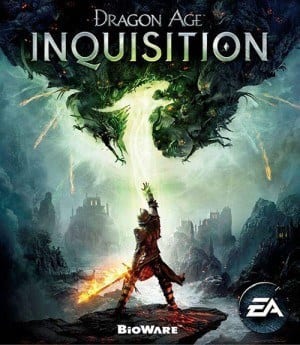 Following up the disappointing sequel in EA’s popular fantasy RPG franchise, Dragon Age Inquisition had a lot of pressure to be successful. The first game in the series, Origins, turned heads and impressed, while Dragon Age 2 seemed rushed and left fans with a bad taste in their mouths. Thankfully, with Inquisition, EA and developer Bioware have earned that trust back.

This time around, you’re thrown into the game with more questions than answers. Instead of a deep background and lead up to the problem that you work to resolve, the game starts with your character emerging from the fade with no memory as to what happened. Unfortunately as you come to, you’re face-to-face with Cassandra, a character you’ll remember from Dragon Age 2. In fact, you’ll see cameos from a number of characters throughout the entirety of Inquisition.

Cassandra isn’t happy to see you though. She wants to kill you because she thinks you’re somehow responsible for The Divine’s passing. This is where the story begins. Because of a strange power emanating from your hand, called The Anchor, the mages hypothesize that the portal you came from, which was closed upon your exit, is somehow linked to the other portals that have sprouted throughout the world.

To confirm this, Cassandra forces you to test your Anchor and, surprising nobody except her, it works. With the Divine dead, The Chantry in shambles, and an ongoing civil war between the Templars and the Mages, the governmental and spiritual pillars of Thedas are crumbling. Enter the Inquisition, a group of individuals determined to restore order to the world.

To complete the story alone will take you 50 to 60 hours. To experience everything available you’re looking at 150+ hours. Even then you may miss some things, like I did with my first playthrough.

The biggest issue with the game, and unfortunately one that makes itself apparent early on and never gets better, is the looting system. When you kill enemies or when you’re out in the world, you can find items from fallen enemies, inside chests, codex to read, and plants or minerals to collect for missions and crafting. In order to find these items, you’re forced to use a sonar-like system that gives an audible ‘ding’ when an item can be picked up. A recent patch made it so the items now appear on your minimap, but aside from that tiny improvement, you’ll spend dozens of hours haplessly clicking your thumbstick in order to determine if you’re walking by anything of importance.

For a game this polished and enjoyable, it’s atrocious.

You’ll gain party members as you progress through the story and, though you’re limited to four per mission (including yourself), you can speak to them about different issues, personal and involving the Inquisition, that may determine their mood with you or may open up additional side missions and rewards.

The most impressive part of your party makeup is the side conversations that appear between characters. Every character reacts to the others differently, making their personalities seem real and fluid, and providing for hundreds of lines of enjoyable dialogue. Iron Bull, a monstrous, horned Katari, is voiced by Freddy Prinze Jr. and does such a magnificent job that you won’t recognize him without someone pointing the fact out.

After forsaking your family and responsibility to finish the game, there’s even a multiplayer mode that can add hundreds of hours to your experience. Multiple pre-made characters group up to complete missions for the Inquisition, a wonderful extension from the single player campaign. Not all characters are available to start though. You’ll have to play with what’s available and either loot or craft additional armor to unlock more characters.

The gameplay is similar to the single player, without the ability to pause combat. As you level, you earn ability points that can be spent in one of two preset ability trees to unlock passive or active skills. Once you hit level 20, you can prestige your character and earn a bonus to all other characters, or continue your adventure on harder difficulties, earning more gold to purchase loot chests, one of the only ways to get upgraded items or items for crafting. You can also spend real money on “Platinum” and buy chests that way, but it’s not necessary.

Between single player and multiplayer, there’s endless enjoyment. Additional difficulties and other decisions made throughout the game add endless replayability and by making different characters at the start, you’ll see different conversations and reactions from NPCs. It’s hard to find a game that includes this much gameplay for just $60.

Fans of the Dragon Age franchise, rejoice. Your savior has returned.