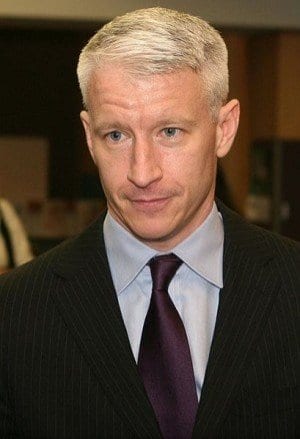 Some people were offended by Anderson Cooper’s giggle fit and words about Dyngus Day.

The AC360 host erupted in laughter during the show’s RidicuList segment about Dyngus Day, a Polish-American celebration that marks the end of lent. The laughter came when Anderson Cooper was describing customs and really got the host giggling was one of the Dyngus Day traditions when the girls at the celebration strike the boys with pussy willow branches.

When Anderson Cooper was struggling to remain composed on the show he said, “It’s really so stupid.” It is pretty obvious by watching the video that he was talking about his giggling fit as being “stupid,” but some took offence to the comments believing the AC360 host was talking about Dyngus Day.

He issued apologies in a few different ways, the first via twitter, “In ridiculist I called my silly giggle fit “so stupid” not @dyngusday.Sounds like a fun celebration. Genuinely sorry if I offended anyone.”

He issued another through the New York Daily News, “I am concerned to hear that some people believe that I called Dyngus Day celebrations ‘stupid’ or in any way criticized this holiday. I did not. While in the midst of a silly giggle fit I said ‘this is so stupid’ in reference to my inability to stop laughing,” the statement said. “I was not saying Dyngus Day was ‘so stupid.’ I apologize to anyone who got the impression that I was being critical of Dyngus Day. I am genuinely sorry if I offended anyone by the lighthearted tone of the RidicuList.”

He even brought on the co-founder of Buffalo’s Dyngus Day celebration to issue him a formal apology. See the clip of Anderson Cooper getting his giggle on and later issuing yet another apology.