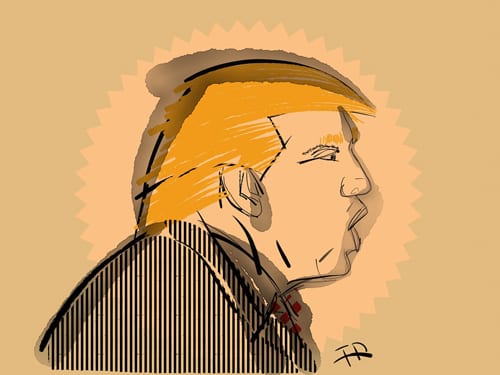 January 20th saw business tycoon Donald Trump become the 45th president of the United States—for better or worse. Anticipation of Donald Trump’s first days as president has been building since the election process, being the catalyst to emotionally charged coverage in the press and conflicts around the globe.

From which celebrities refused invitation to play at the inauguration and Trump’s relationship with Russian president Vladimir Putin, to controversial cabinet choices and threats to women’s rights, the last few months have been eventful to say the least.

The transition of power from Obama to Trump extended to the White House website with previous information archived so that all digital properties were fresh for the new Trump administration. Pages on the website that were once exclusive for LGBTQ rights and climate change policies have disappeared. Considering the Republican’s vocal lack of belief in climate change, this move seems a threat to the progression of climate change science and the future of LGBTQ rights.

A statement that replaced the information on the climate change page said: “”For too long, we’ve been held back by burdensome regulations on our energy industry. President Trump is committed to eliminating harmful and unnecessary policies such as the Climate Action Plan and the Waters of the US rule.””

You might also enjoy: The LGBTQ Community in Schools

On the day after the inauguration and Trump’s first day as president, women, men and children marched for the protection of fundamental women’s rights and the “safeguarding of freedoms threatened by recent political events”. The march stemmed from the controversy surrounding women’s rights to abortion and the president’s casual bragging about sexual assault; the most famous quote being “grab them by the p****”. If a man with this attitude is now the president of the United States, what does this mean for women? Are we about to step back 30 years?

The Guardian reported that an estimate of two million women rallied in solidarity in the women’s march across America and around the globe, including Canada and the UK, with numbers still rising.

Trump responded to the women’s march with a surprisingly mature tweet:
“Peaceful protests are a hallmark of our democracy. Even if I don’t always agree, I recognize the rights of people to express their views.”

In his first days as president, Trump has already signed an anti-abortion executive order, also known as the global gag rule, which prevents US dollars funding organizations that “perform or actively promote” abortions. The witnesses for this signing were all male, unsurprisingly, sending a powerful message about the patriotic rule that men hold over women. This ruling severely impacts the lives of millions of women in underdeveloped countries, whose healthcare systems rely on US funding to deliver high standards of healthcare to its people. Activists have described the ruling as an “assault on women’s rights.”

Trump is also likely to push forward with the Dokata pipeline that threatens to contaminate local waters and destroy sacred Native American sites. The $3.8billion plan garnered huge recognition around the world as hundreds of thousands of people—including Native Americans and celebrities—took to Sioux Rock to protest the introduction of the pipeline. The US Corps of Engineering had initially denied a permit to lay the pipeline with the support of Obama, but it is now likely that Trump will rescind. While Trump has shares in Dakota Access Pipeline (DAPL), he denies any personal interest and implores that the ruling will be to create jobs for the American people and to boost economic growth.

Trump’s first days as president have set a precedence for a Republican future in America. While it seems gloomy now, whether this future will benefit the everyday American remains to be seen.