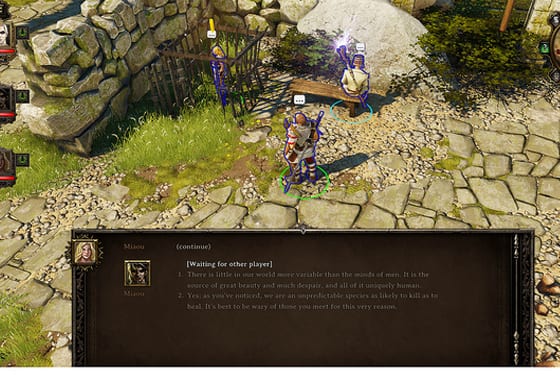 The underrated rolepaying game Divinity: Original Sin is one to remember

Gamers, you may not have heard of Divinity: Original Sin. If you haven’t, listen in. Divinity: Original Sin is a masterpiece in its own right, and you’re not going to want to miss this one. Whether you’re rocking a PS4 or a PC, you owe it to yourself to at least take a gander at this semi-underground gaming masterwork. Be warned: once hooked, your friends and family will be seeing significantly less of you. Fortunately, if they complain, you can buy a copy for them and force them to play with you. They’ll quickly understand.

You will also like: Dragon Quest Heroes playthrough review

Divinity: Original Sin exists as a single-player or a cooperate multiplayer fantasy roleplaying video game. It was developed by Larian Studios, a studio that focuses primarily on roleplaying and educational games. If you enjoyed games like World of Warcraft or Guild Wars, you’ll find your roleplaying needs fully satisfied in Divinity. If you enjoyed games like Fire Emblem, your love of turn-based strategy is met here as well. And if you couldn’t get enough of the looting and camera angles of the Diablo franchise, you better get your butt over to Amazon and buy yourself Divinity: Original Sin. The game’s design was so well received by gamers that a Kickstarter crowdfunding campaign was able to raise over one million additional dollars to expand the content before release.

Yeah But… Why’s It So Great?

Divinity: Original Sin seamlessly combines what is lauded in several different video game genres into one immersive experience. However, it doesn’t force those different genres onto its players. Instead, it offers various routes to the same end goal. For instance, there is a good deal of exploration and loot-gathering available in places like towns. Here is where roleplayers can shine, figuring out the miniature puzzles and dialogue tricks in each house with each person. Strategic gamers who love turn-based fighting, on the other hand, can explore outer reaches of the map to level up their characters and challenge themselves with complex battles. You also have the option to adjust the difficulty of the game as a whole, which helps capture the attention of a wider range of players.

The game itself is beautifully and meticulously crafted. Every person, every rock, every river, every cave is fascinatingly ornate and completely believable. The atmosphere of the game shifts with new areas and is consistently spot-on with the mood of the plot. As with games like GTA V, there are tons of tiny details in surprising places that are perfectly thought-out and oftentimes humorous. You’ll find gems of writing in item descriptions, character dialogues, and other unexpected places where most games wouldn’t bother.

This is not a video game for the casual gamer. It can be quite difficult and bewildering at times and it puts very little effort into holding your hand in the beginning. You get dropped into the Divinity: Original Sin universe as abruptly as you are in the plot and you are left to fend for yourself. Once you grab ahold of the reigns and begin playing the way you want, you’ll find yourself enthralled. The challenges are gloriously rewarding and you’ll be fighting your roommate or significant other for the controller when it comes time to play. Divinity: Original Sin is an excellent game by any standards and will, for a long time, stand as one of the best turn-based roleplaying games available.

You should also read: The Witcher 3: Wild Hunt