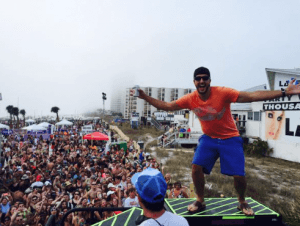 After more than half a decade, Luke Bryan’s spring break concert and album series has come to a bittersweet end.

Bryan wrapped up his seven-year-long annual concert series at Spinnaker Beach Club in Panama City on March 12 with more than 200,000 fans in attendance.

Eager to get close to see the CMA Entertainer of the Year close out his final spring break trek, fans began lining up as early as 1 a.m., slept in their cars and even on the steps of the entry of the beach club.

This year marked the final concert series and final EP that put the annual event under wraps. The final album to release from the series is Bryan’s Spring Break…Checkin’ Out record which dropped March 10. The record features five new songs as well as six tracks from 2014’s EP.

The shows kicked off with a hype performance of his hit song, “That’s My Kind of Night” and the event closed out on day two with a final performance of “Country Girl (Shake It For Me),” in which Bryan brought out his wife Caroline and mother towards the end of the performance as they sang and danced along.

Bryan also performed a special song titled “Spring Breakdown,” a heartfelt song that tells the tale of the spring break ventures he’s experience over the years, from drinking beer to watching the audience of fans before him grow from a thousand to a couple hundred thousand.

Although this is the end of the spring break tradition, Bryan will be embarking on his cross country Kickin’ The Dust Up tour set to take off on May 8 in Grand Forks, North Dakota and runs through the end of October. Accompanying him on tour will be Dustin Lynch and Randy Houser with Florida Georgia Line and Thomas Rhett being added to select shows as special guests.

Check out his closing video for the spring break tradition featuring his song, “Spring Breakdown” below.