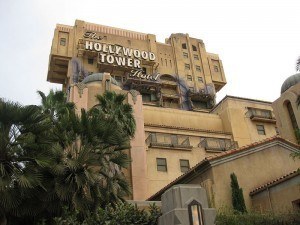 Disorderly man taken down at the happiest place on earth

The Disney pepper spray incident has gone viral, with over a million views on YouTube. The fight between a seemingly intoxicated man and  park employee was caught on a cell-phone camera and posted to the internet on Monday.

In the video, Glenn Horlacher, who appears to be drunk, is seen taking a swing at a Disney security guard in a straw hat. He then falls down and is pushed by a Disney employee dressed as a Tower of Terror bellhop. The security guard then blasts him with pepper spray.

Ignoring the guard’s instructions to stay on the ground, Horlacher manages to get up and uses the ride’s gate to hold himself upright while he screams obscenities at the Disney guard before attempting to punch him again. The momentum of this swing was apparently enough to know him down again, when he is swarmed by park guests and is hit with another blast of pepper spray. The park guests gladly sit on Horlacher until police arrive on the scene.

It is unclear how the brawl started.

A woman can be heard in the background, of the video screaming, “There are kids here. Does this guy not get that? You’re in Disneyland!” Another guest laughs, “I think this guy’s been drinking vodka!”

Sgt. Bob Dunn said that police were called to the “Tower of Terror” ride at Disney’s California Adventure at 3:30 p.m. on Saturday. Horlacher was arrested on battery and assault charges, booked at the Anaheim jail and released later that evening, said Dunn.