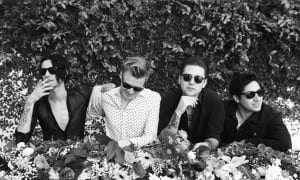 I had a chance to catch up with Austin Hayman at Dear Boy’s February 25th show at Bardot in Hollywood. Ben Grey was gracious enough to join in later for an in depth look at the stories behind a few of Dear Boy’s songs.

Was a lot of your music written in London?

AH: Well the EP was written in London – that’s the 5 songs on the Dear Boy EP. We’ve done a lot of writing since then. We’ve basically written an entire full length that isn’t out yet. Including Hesitation Waltz that’s already out, we’ve written a lot of the stuff within the past year here in LA.

So, was London the first big batch of songs that were written?

AH: Pretty much. They went to London as an old band and wrote a bunch of material and kind of went through this transformation to become what became Dear Boy and a couple people left the band and I joined and Nils joined. It wasn’t necessarily Dear Boy when that stuff was written, but that became like like: “This is a new thing. This is Dear Boy. This is what Dear Boy is about.”

How did you get involved?

AH: Ben and I were in separate bands that had played shows together and he just hit me up one day. It’s funny, since the EP was written, we’ve evolved so much since then. Not to the point where it’s not relevant anymore, but I think that all the stuff on our full-length is definitely the four of us.

Where did the name Dear Boy come from?

AH: Well while they were in London they were out at dinner for Thanksgiving, and as you know Thanksgiving’s not a real thing in London. And I think they said something to the waitress about being there and not really being able to spend it with their family or anything and the waitress referred to them as “Dear Boys” and that just struck a chord like “alright” and that was it. It fits, it’s cool, there’s a cool story behind it.

What’s the next step for Dear Boy?

AH: We’ve been playing a ton of shows. 2015 has been really awesome so far – we’ve played a bunch of stuff along the West Coast and we’re playing Orange County next week. We’re going to SXSW and we have a really crazy week at SX we’re playing a whole bunch of shows that’s gonna be really fun. Last year we did it, but it definitely wasn’t as busy as this year. We’re also planning on doing a full length and putting it out by the end of the year.

Do you think Dear Boy will get signed soon?

AH: Yeah, we’re definitely in talks with a lot of people but we really haven’t made a choice yet. You have to be really selective about who you wanna work with, especially with your first album because it can really make or break you.

When did you first start playing music?

AH: I first started playing music when I was seven years old. My dad was a music teacher so I didn’t really have a choice…in a good way. Well not necessarily – I hated it when I was a child. I distinctly remember this moment when I was inside and I was being forced to practice. My friends came and knocked on the door for me to come out and play and I was like “I can’t go out and play.” When I was done practicing I went outside and no one was outside playing anymore. I was so mad that I was like “screw guitar! screw this!” -but i was forced to play anyway. It’s just about getting over the hump where you start to feel like you’re good enough that it’s fun. At first it’s not fun; anything you’re not good at, it’s not fun. But now I’m kind of glad that I was forced to do it. Well once I was at least a preteen I became obsessed with it. It was all I wanted to do, all I cared about.

BG: I could never have imagined myself becoming a professional musician. Seriously, I was in punk bands from ages 12 to 16, but that was for fun. It was catharsis. I never thought fun and catharsis could be your job.

I found the courage to start singing my own songs when I was 17 and it all changed. It was clear to me that this was what I was meant to do. My relationship with audiences and expression totally changed. I mean, there was a time I thought I would be a chef. It’s so wild to think about that now. I can still cook though, so don’t even worry about it.

What’s the writing dynamic within the band?

AH: Ben writes all the lyrics. But a lot of times it’s super collaborative. Either somebody will have something and come in, like just the start of something. Rarely does anybody ever come in  with something really put together. It happens every once in a while but a lot of it’s just an idea or something that will happen in practice. Somebody will start something and we’ll be like “that’s really cool,” and just go with it. Most of the time with bands that I’ve been in – that’s not really how it works. It takes a really strong connection between members so that people know how each other play, to be able to do that. A lot of times it takes playing together for a long time to be able to do that. We were just able to do that from the beginning and that was cool. Most of the bands I’ve been in didn’t do that, someone would just come in with a full song – but this is a really cool way to work and it feels like everybody has a part and the sound is all of us. That’s special, you know?

Do you have a standard writing process or do you just write as it comes to you?

BG: The high of this whole thing is chasing the inexplicable. That’s really just a fluffy way of saying there is no set process. I guess that’s part of the reason making music is so attractive: it’s unpredictable and wonderful. A song might come out of a conversation, something you mishear, a mistake, how you feel when you play certain chord. It’s magic.

Are all, some, or none of the songs written about real people and events?

BG: Some songs, absolutely. I’d say all of the songs are inspired by those things, but they’re not all direct narratives or anything. I don’t know about other writers, but I don’t go into a song with the intention of writing about somebody or something specific. The song kinda tells you what it’s about while you’re making it. That’s part of why it’s so exciting… You never know when you’re going to do your best work. That’s why you keep showing up.

Who is “green eyes” and why “goodbye”?

BG: “Green Eyes” is technically the first Dear Boy song ever written, actually. We finished the song while we were living in London and without getting too crazy with this answer, it’s essentially about putting a piece of my history to rest.

Before we started Dear Boy, I was in a band named after a girl with green eyes… So I guess you could say that the song is a formal goodbye to her and more importantly a goodbye to an identity that I had lived with since I was a teenager. So this signified a change; there would be no Dear Boy without “Green Eyes.”

What is “Funeral Waves” about? Where did the line “I’ll find God before he finds me” come from?

BG: That line’s origin is a mystery to me… I just started kinda saying it to myself one day while I was riding on the underground. It was actually the first thing written for that song… before a melody or a chord progression or anything. It was a bizarre mantra. A few weeks later, we started rehearsing and I knew I finally had a place for it.

You guys definitely have a very strong connection to your fans. Are you afraid your relationships with your fans will change when you start to get bigger?

AH: I mean inevitably you can’t remain in touch with so many people when you get bigger, that’s just the way it is, but I think that I see really big bands that do have that connection with fans. There are still those people that are at every show and the people that are really hardcore even if you’re super big – you’re gonna remember them. If the same person is in the front row every night, you’re going to recognize them. But it’s super important to have that, especially at our level, to be such good friends with these people. That’s part of the fun of doing this – the opportunity to meet people all the time. Some people aren’t cool but a lot of people are – a lot of people don’t get that opportunity to be around people like that.

BG: One of the things we’re the most proud of is the community we’ve helped create amidst the congestion of LA. We’re all in this together and it’d be impossible to forget the people who have helped take us this far. We’ve been incredibly lucky.

You should also read: We experienced Zedd’s  True Color Tour