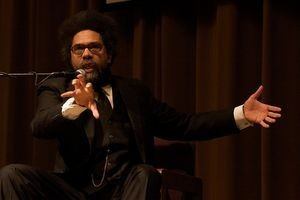 Cornel West has become the latest big name to join forces with the Wall Street protesters.

Clutch reports that Cornel West appeared at the protest on Tuesday night and spoke to the masses gathered there in protest. Reportedly, West engaged the crowd in a call and response speech, telling them not to be afraid of revolution.

West spoke out against “the greed of Wall Street oligarchs and corporate plutocrats who squeeze the democratic juices out of this country.”

West continued, “I am so blessed to be here. You got me spiritually break-dancing on the way here. Because when you bring folk together, of all colors, of all cultures, of all genders, of all sexual orientations the elite will tremble in their boots. And we will send a message that this is the U.S. Autumn, responding to the Arab Spring.”
West ended his speech by saying, “We want to transfer power from oligarchs to ordinary citizens… We the people have found our voice.”

You can view footage of the speech in the video below.

Dr. Cornel West is a professor at Princeton.