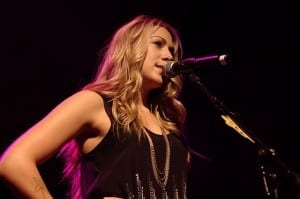 Singer-songwriter Colbie Caillat takes a stand on impossible beauty standards in her latest music video, Try. Her powerful lyrics promote a beautiful message to women by encouraging them to wipe off the makeup and reassures them that they are perfect just the way they are.

Inspiration for the song sparked while working with Kenneth Babyface Edmonds in the recording studio. Caillat expressed the pressure she felt to become someone she’s not both image-wise and musically. Although she didn’t want to, she often did what was asked to make people happy. That’s when Babyface suggested otherwise.

Instead, Caillat was encouraged to write about what she was being asked to do that changed who she is. “Try” instantly became a result of that creative freedom.

“When you have blemishes on your skin, gain weight, or my friend has crooked teeth, or my mom’s roots are going gray. And everyone is trying to hide their faults from each other when we all have it. So Babyface inspired me to write this and it’s all from personal experience,” said Caillat in an interview with Cosmopolitan.

The music video for “Try” features Caillat, along with several women of all ages in full makeup. As the video goes on, the makeup begins to evaporate and viewers are left with what lies beneath the fake eyelashes, foundation and false hair.

The song is a self-acceptance anthem that promotes natural beauty and takes a stab at society’s unrealistic beauty standards and according to Caillat, is a message that needs to be shared more often.

Caillat’s new album cover will feature a more simple, real version of herself as she’s opting out of Photoshop despite her previous concern that the album wouldn’t look as polished next to other artists. Caillat remains determined to avoid creating a false reality about her image to her fans.