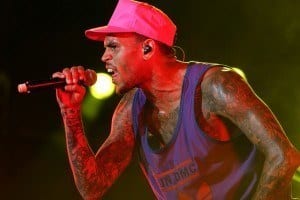 Chris Brown tested positive for marijuana use this summer during a random drug test in Virginia. A judge has ordered a probation violation hearing for November 1. The singer is on a five-year probation from the 2009 assault on then-girlfriend, singer Rihanna, and the positive marijuana test may be a problem.

Chris Brown apparently told authorities that the marijuana was ingested in California where he has a medical marijuana card, even though the test was done in Virginia, where marijuana is illegal. Superior Court Judge Patricia Schnegg said it probably will not be a big deal for his record, but she will also be going over possible travel violations of his probation and iffy community service records. The judge has ordered Brown to see his probation officer in the next three days.

Even though the positive test may not affect his record, Schnegg warned Chris Brown of the effect it may have on his public image.
”You are not an average person who can sit in their living room and do what you want to do. You are not only in the public eye, but you are on probation,” she said. “And you’re on probation to me which means that if you violate any laws or orders, then you’re subject to a probation violation.”

The singer lives in his hometown of Richmond, Va. where he was ordered to complete his community service for his past offense.