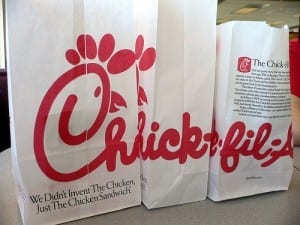 Chick-fil-A workers in Florida are being praised for helping to locate and safely return a runaway teenage girl to her family last week.

After finding a note saying that their 16-year-old daughter, Kaitlyn Harp, had run away with 19-year-old Daniel Bridgeman, Steve and Tammy Harp turned to Instagram to find a photo of the young couple, who had met online only several months earlier.

Bridgeman was pictured with a Chick-fil-A shirt, and this led the Harps to their local restaurant in Jacksonville to ask if anyone had seen the twosome.

Once connected to another Chick-fil-A in Yulee, the franchise manager posted the Instagram photo to the company’s Facebook page in hopes of alerting other store operators across the state.

Within a few hours of the posting, Elio Florin, a Chick-fil-A manager in Winter Haven, recognized Bridgeman as one of his employees and told Bridgeman to make Kaitlyn Harp contact her family.

Florin then drove her 200 miles back to her Jacksonville home and brought Bridgeman along for the ride.

“Tears were shed on our driveway this morning,” Tammy Harp told USA Today. “He [Florin] couldn’t sleep. He is a father too. He could not go to bed without resting, knowing that she was home safe.”

The runaway began when Bridgeman drove from Winter Haven to pick up Kaitlyn Harp in the middle of the night. He reportedly faced no charges, but the Harps said he received a stern lecture from police officers waiting at their home when Florin arrived with the couple.

“Because of their involvement, what could have taken days, weeks or months only took a matter of two or three hours once they got involved,” Steve Harp said to First Coast News. “It is beyond words. As a parent, this is your worst nightmare.”

Previous ArticleComedic wunderkind Harold Ramis dies at age 69Next ArticleNASCAR '14 is a Contender, but Comes Up Short of the Checkered Flag