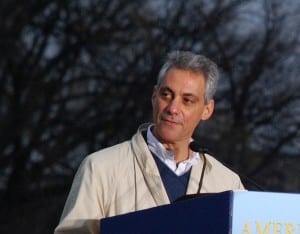 More than 400,000 children will not learn anything new at Chicago Public Schools today, as the Chicago Teachers Union went on strike this morning for the first time in 25 years. Karen Lewis, president of the union, announced that after more than a year of negotiations for higher salaries, health benefits and job security, the union and the school district “failed to reach an agreement that would prevent a labor strike.”

A fraction of the Chicago Public Schools have opened their doors to children from 8:30 a.m. to 12:30 p.m. in an effort to help working parents find places for their children. The children will receive free breakfasts and lunches at 144 schools that are participating in the program, part of the “Children First” plan put in place in the event of a strike. Still, thousands of children are left with nowhere to go.

Chicago School Board President David Vitale said that more than 20 offers have been made to the teachers union, but at a certain point, “there’s only so much money in the system.” Raising teachers’ salaries just one percentage point would cost $20 million, a district spokeswoman said. But teachers want their salaries to reflect the longer day instituted for Chicago Public Schools, a reform championed by Mayor Rahm Emanuel.

The Chicago Public Schools district, already plagued by dismal finances, had offered teachers a 16 percent raise over four years, a far cry from the 30 percent over two years that the union demanded. However, the district had also offered other benefits, including a program for placing teachers who are laid off because of school closings.

“Recognizing the Board’s fiscal woes, we are not far apart on compensation,” union president Lewis said. “However, we are apart on benefits. We want to maintain the existing health benefits.” Lewis also cited evaluation procedures as a reason for the strike.

Mayor Emanuel responded by saying that he thought the offers made by Chicago Public Schools constituted “an honorable deal and an honest compromise.”

The strike was authorized by 90 percent of Chicago Teachers Union members. It would have passed with only 75 percent of the vote.