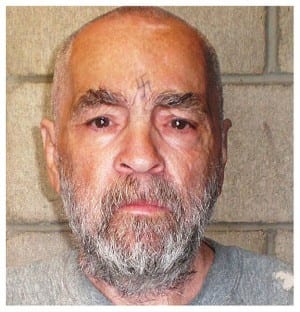 The infamous murderer was denied parole for the 12th time Wednesday

Charles Manson will spend at least 15 more years in prison.

Charles Manson, one of America’s most notorious convicts, was scheduled to go before the parole board Wednesday. He was denied parole for the 12th and possibly final time, as the 77 year-old convict won’t be up for parole again until 2027. He will be 92 by then.

John Peck, a member of the parole panel, said that the board did not see any signs of rehabilitation. Charles Manson has refused self-help programs and vocational training, and has accumulated 108 serious disciplinary violations during his time in prison.

Twice in the last few years Charles Manson has been found in possession of cell phones, which he used to call people in three states. He has also been found with homemade weapons.

John Peck read a quote aloud to the board that Charles Manson had said to a prison psychologist.

“I’m special. I’m not like the average inmate. I have spent my life in prison. I have put five people in the grave. I’m a very dangerous man.”
While this statement contrasts with his past argument that he did not personally murder nine people in 1969, the parole board said they did not believe he had shown any remorse for the crimes.

Charles Manson was originally sentenced to death for the murder spree his “family” carried out on August 9, 1969. During the spree, they killed 26  year-old actress Sharon Tate, who was 8 ½ months pregnant.

Sharon Tate was hosting friends at the Hollywood home where she lived with her husband, director Roman Polanski. Polanski was out of town, but Jay Sebring, Voytek Frykowski, Abigail Folger (of the coffee dynasty), and Steven Parent were all present when Charles Manson’s family entered the home and brutally slaughtered the party goers.

Another couple, Leno and Rosemary LaBianca, were murdered the next evening by the “family.”

Charles Manson was already an ex-convict when he took in several runaways known as the Manson Family. He used his charismatic ways to convince his mostly young, female followers to carry out the murders. The tragedy at the Tate home was thought to be a plot to incite a race war against whites and blacks, but no clear motive was ever found.