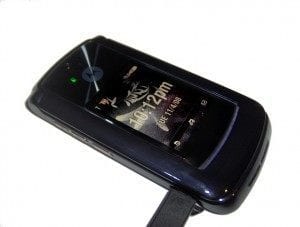 Cell phone jammers are something most people don’t regularly think about outside of spy movies. The issue has come into focus recently after a man in Philadelphia was caught using one to block out chatter on his bus.

The man, Eric, would use his cell phone jammer when he got annoyed with the conversations he was hearing. “A lot of people are extremely loud, no sense of just privacy or anything. When it becomes a bother, that’s when I screw on the antennae and flip the switch,” Eric told NBC 10.

When a cell phone jammer is turned on it can block any cell phone service in the area. Using one is a federal crime and could result in a $16,000 fine and jail time.

It’s easy to purchase a jammer at websites such as phonejammer.com and jammerall.com.

“We remind and warn consumers that it is a violation of federal law to use a cell jammer or similar devices that intentionally block, jam, or interfere with authorized radio communications such as cell phones, police radar, GPS, and Wi-Fi,” states the FCC on its website.

With all this recent attention on cell phone jamming, the FCC is trying to determine whether the government should be allowed to freeze a wireless network in the name of public safety, such as when the San Francisco’s Bay Area Rapid Transit did last August while to prevent a protest.

In December, Bay Area Rapid Transit agreed to a policy that would allow authorities to shut down cellphone access in “the most extraordinary circumstances,” such as a threat to public safety. The FCC weighed in on that policy but did not officially endorse it.

The FCC is currently asking for public comments about the circumstances under which the government should be able to suspend wireless service and the procedures it should follow when doing so.