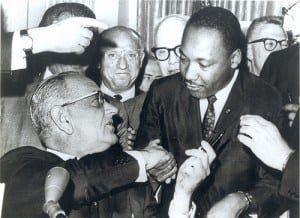 Martin Luther King Jr.’s birthday is celebrated across the U.S. today to commemorate what would have been his 84th birthday.  The Baptist preacher from Georgia, who launched a moral crusade against Jim Crow nearly six decades ago, was gunned down on a Memphis hotel balcony in 1968.
Martin Luther King Jr.’s memory of fighting for equal rights, mutual respect and racial tolerance is seared into the American conscience.  Martin Luther King Jr.’s words resonate with an increasingly tolerant generation who use his memory of peace and justice to guide them in their daily lives.
For many onlookers and supporters of President Obama, Martin Luther King Jr.’s message of tolerance and equality come full circle with the second inauguration of the president on MLK Day 2013.  “President Obama represents the last lap of this unfinished race,” said the Rev. Jesse Jackson to a Washington Post reporter.
Chicagoans already started celebrating MLK Day Sunday.  The Chicago Tribune reports that a group of more than 70 people boarded a yellow school bus to visit some key King landmarks on the West Side of the city.
At another event, 800 people celebrated Dr. King at the West Point Missionary Baptist Church on the South Side.  “We must work in the spirit of Dr. King because children are being killed by guns almost everyday,” the Rev. Otis Moss III, pastor of Trinity United Church of Christ, said in a news release to the Chicago Tribune.
In New Orleans the city’s celebration of Martin Luther King Jr. Day begins Tuesday and concludes with a series of events Monday, Jan. 21with a march from City Hall to the city’s MLK Memorial.  This year’s event will include a wreath laying ceremony, an educational presentation on  civil disobedience in the civil rights movement, a choral concert and an art exhibition.
MLK Day will be observed in many different forms across the country, from the president’s inauguration in Washington to a bus tour in Chicago.  This year is also the 50th anniversary of Martin Luther King Jr.’s historic march on Washington D.C.