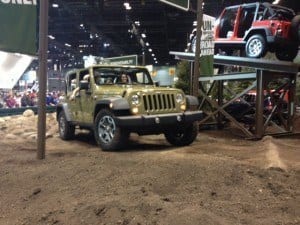 What if someone told you that there were affordable new cars for college students? Sure, these commuter wagons aren’t going to get you 0-60 in four seconds flat.  Speeds in the triple digits might shake the tires off, and word is that the ladies aren’t impressed by a steel box on wheels.  But if you’re looking for a vehicle to get you around town, to and from classes and back and forth from your internship, there are affordable cars out there.

The Chicago Auto Show, and car shows generally, can be thought of as big showrooms, designed to introduce buying customers to a brand’s latest and greatest automobiles.  A variety of interactive exhibits and activities keep kids and adults entertained, but there main purpose is to generate enthusiasm about the coming year’s newest cars.

Take the Ford Focus, for example.  Ford is offering a $500 discount for college students or recent graduates. “Right now, the Focus has an automatic discount of $2,000, so that’s an additional $2,500 a college kid could got off the car,” said Bill Ozug, a Ford salesman for Lakeshore Motors, a Chicago-area Ford, Toyota and Scion dealership.

With a starting price at $16,200, the Ford Focus is well within the affordable range for a young person in college or recently graduated- and hopefully employed.  With an automatic transmission for an additional $1,095, its mileage rating is a respectable 26 mpg city and 36 highway.

“You can go in with a Ford with some decent features, but it’s going to price you in at the low 20s.  If you’re going to spend that kind of money, you might as well go with an entry level Civic,” said Nick Hanna, a Chicago-area Honda salesman.  The Civic starts at $17,965, with the automatic coming in at $18,765.  Standard features impressively include a rearview camera, Bluetooth HandsFreeLink and a USB audio interface.  A fully-loaded Civic will cost just over $25,000.

Cars weren’t the only cool feature on display at some automakers.  At Chrysler, visitors had the opportunity to take a ride in a Jeep of their choosing around a small course, a dirt road with a steep hill and a series of tightly packed bumps, meant to show off Jeep’s four wheeling muscle.  “The coolest part was going down the hill. She [the driver] didn’t put her foot on the break or anything, said Zach Drakert, an auto show patron from Kenosha.

If classic cars are more your thing, the Chicago Auto Show invited the Illinois Camaro Club, the oldest club of its kind in Illinois, to display five of their most prized cars, spanning decades of Chevy Camaro history.  “We wanted to choose cars that would catch your eye, want you to take pictures, want you to see, want you to ask questions, and that’s what we did, from a pro touring first generation to a reborn fifth generation that produces more than 600 horsepower,” said Rich Hanck, a member of the club.

The first ever diesel-powered domestic vehicle was unveiled at the Chicago Auto Show.  Starting at just $26,995, which is great for a diesel car, the new Chevy Cruze Diesel produces a fuel economy rating of 42 mpg highway and 36 city.  “The car is environmentally friendly.  It has greater than 90% less nitrogen oxide emissions and it even produces 25% less emissions than a gasoline engine,” said Sara Holden, a Chevrolet product specialist.

To withstand the rigors of high compression, diesel engines are built more ruggedly than gasoline engines, and as a result, tend to last much longer, sometimes even twice as long, according to Deanne Sclar, contributing author of Auto Repair for Dummies, 2nd Edition.  If you’re looking for a vehicle to last you upwards of a decade, without any major repairs before 300,000 miles, a diesel might just be your best bet.  The Chevy Cruze diesel will be available starting summer 2013.

At this year’s Chicago Auto Show, the most popular foreign and domestic automakers are finally providing the financially strapped a few pretty attractive options.  But if a new car costing upwards of $15,000 is still breaking the bank, the used car market is always a reluctant last resort.

Autotrader.com, Ebay, and Craigslist are great places to conduct your search.  Just be sure to do your research on the seller.  There’s nothing worse than dealing with someone who is unreliable or difficult to contact.

And finally, be patient and persevere; your dream car will come to you.