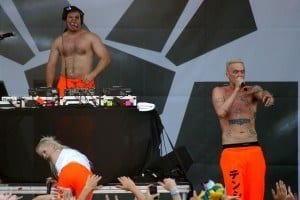 Ninja goes on a bloody rampage then gets revived by spit

Eccentric South African duo Die Antwoord has brought us the first single from their third upcoming album Donker Mag. Each of their music videos gets more surreal as the years go on. Enter the Ninja featured a ton of mice, the late Leon Botha and Yolandi Vi$$er, doing her best to be a sensual schoolgirl. From there on we have seen prothestic masks, roach eating, Lady Gaga being eaten by a lion, butt sex and all kinds of disturbingly comedic imagery.

They might have outdone themselves this time around with their video “Pitbull Terrier”. Ninja directs and stars in this one in really intricate prosthetic makeup to give them the appearance of a rabid pitbull. Complete with thick drool spewing from his canine lips, Ninja raps while two scantily clad cat ladies in body paint dance sensually next to him. He also goes on a homicidal spree and rips people into bloody pulps on his angry pitbull run.

The pitbull terrier then jumps out of a window to his death, but is then revived by a huge wad of Yolandi’s saliva. Sounds like an adventure for champions. Donker Mag is due out June 3, 2014 and the duo are also slated to star in fellow South African director Neill Blomkamp’s upcoming sci-fi comedy film “Chappie”. WATCH THE VIDEO HERE

Previous ArticleCurrency Wars: Are we currently living in a fake economy?Next Article10 Tips on Getting In-State Tuition