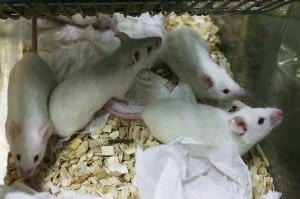 A new cancer drug is showing promise in improving cognitive abilities of older mice diseased with Alzheimer’s, according to University of Pennsylvania scientists.

The drug epothilone, or EpoD for short, has had positive studies in slowing the decline of memory in mice that were engineered for that very purpose- given Alzheimer’s to have tests run on them.

The study is still far from humans. Scientists warn that long-term side effects are still a variable that could inhibit the drug from human testing. And still, often times, these test don not translate from mice to humans in the same ways.

Dr. Brad Dickerson, an associate professor of neurology at Harvard Medical School commented on the success of the study,”This is a very early basic science study in mice and requires substantial additional investigation in order to determine whether it is worth pursuing in patients,” he continued, “The leap from animal studies to human clinical trials is a big one and always takes many years. Drugs in this class are being studied in various types of cancer, which hopefully will provide an indication of their side effects and other important information about how feasible it would be to give these types of medications to patients with Alzheimer’s disease if further studies support the potential value of this approach.”

EpoD is said to help prevent what have become know as “tangles” in the brains nerve cells. The cancer drug has been similarities to a well-know chemotherapy drug called paclitaxel. The only difference with EpoD is that “it crosses the blood-brain barrier”, said Kurt Brunden, lead scientist on the cancer drug, ““EpoD readily enters the brain, where it appears to persist for a much longer time than in the blood. This may explain why low doses were both effective and safe in the mouse model of Alzheimer’s disease.”