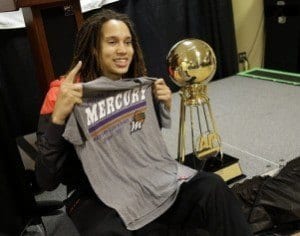 Brittney Griner, former Baylor star and now number one draft pick to the Phoenix Mercury in the WNBA draft, announced she was gay in an interview with Sports Illustrated earlier this week.

Griner, 22, told the publication, in answer to a question the difference between men’s and women’s sports and sexual orientation, “I really couldn’t give an answer on why that’s so different. Being one that’s out, it’s just being who you are. Again, like I said, just be who you are.”

The WNBA has many players who are openly homosexual, but American male sports have yet to see the first openly gay player, according to CBS Sports.

Griner said the decision to come out was not a difficult choice for her. She said she has always been open about her sexuality and self-accepting and that she hopes younger players will use her as an example and follow suit.

A New York Times article about Griner’s statement attempts to highlight why her announcement wasn’t paid very much attention by the public and the media.

Jim Buzinski, founder of Outsports.com, told the New York Times, “Because [Griner] was a woman. Can you imagine if it was a man who did the exact same thing? Everyone’s head would have exploded.”

Anna Aagenes, executive director of GO! Athletes, told the New York Times, “We talk a lot in the LGBT community about how sexism is a big part of what contributes to homophobia. It’s disheartening when there are so many great role model female athletes out that we’re so focused on waiting for a male pro athlete to come out in one of the four major sports.”

Griner will begin her professional basketball career at the end of May.