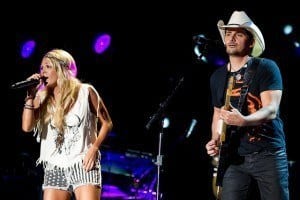 Brad Paisley and Carrie Underwood have teamed up yet again, only this time to to poke fun at an ongoing legal dispute that struck after their last collaboration.

The two first collaborated on “Remind Me,” a RIAA 2x Platinum certified No. 1 single from Paisley’s This Is Country Music album which sparked a $10 million lawsuit. At number 17, the song is also credited as Paisley’s highest ranking song on Billboard Hot 100 chart.

Songwriter Amy Bowen filed a lawsuit claiming that “Remind Me” writers Chris DuBois, Kelley Lovelace along with Paisley stole the song from her. Bowen claims she first presented a song also called “Remind Me” in 2008 at a 14-week songwriting workshop where Lovelace and DuBois served on the panel of professional songwriters.

Although Paisley and Underwood have denied any wrongdoing in light of the allegations, a judge allowed the case to go to trial but no date has been set.

Paisley and Underwood have poked fun at the lawsuit in their latest collaboration, “High Life,” a song from Paisley’s forthcoming album, Moonshine in the Trunk.

Together they sing, “I heard a song a couple months ago / It was Carrie Underwood on the radio / It reminded me of a poem my brother wrote / Back in the second grade / Now I know she didn’t steal it, but so what? / We lawyered up and we sued her butt / These days we figure we’d pretty much / Get paid to go away.”

Moonshine in the Trunk will be released Aug. 26 and the two West Virginia natives are returning to co-host the CMA Awards for the seventh consecutive year at the Bridgestone Arena in Nashville on Nov. 5.

Previous ArticleLil' Kim Takes Back the Crown After Dissing Nicki MinajNext ArticleCost-Per-Wear Theory: Maximizing the Value of Each Piece of Clothing in Your Wardrobe