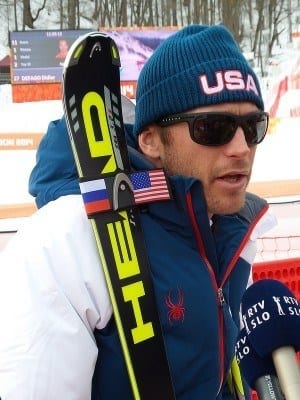 NBC is being criticized for broadcasting an interview with U.S. Alpine skier Bode Miller that brought him to tears.

After winning a bronze medal in the men’s super-G competition, Bode Miller was interviewed by NBC’s Christin Cooper. He dedicated the race and medal to his younger brother, Chelone, who died in April of a seizure. Much like Miller, Chelone also wanted to be an Olympian.

In a series of questions, Christin Cooper asked Miller about the value of the medal, mentioning how he wanted to experience the games with Chelone. The final question resonated with him, “When you’re looking up in the sky at the start, we see you there and it looks like you’re talking to somebody,” Cooper said. “What’s going on there?”

At that moment, Miller leaned onto a nearby railing and began to cry, burying his face in his arm. Still upset, he eventually walked away from the camera and kneeled behind a barrier before being consoled by his wife.

The interview angered many viewers, who thought the questions were meant to make Miller emotional. The New York Times’ Richard Sandomir called the scenario “overkill.” Kami Mattioli of the Sporting News said Miller was “repeatedly badgered,” and the Associated Press’ David Bauder said the interview was a “shameful spectacle.”

NBC issued a statement in support of its decision to air the interview. “We understand how some viewers thought the line of questioning went too far, but it was our judgment that his answers were a necessary part of the story,” the statement said.

Afterward, Miller took to Twitter to defend Cooper, saying she asked questions typical of any interviewer.

In a Monday appearance on the “Today Show, “ he added, “I have known Christin a long time, and she’s a sweetheart of a person. I know she didn’t mean to push. I don’t think she really anticipated what my reaction was going to be, and I think by the time she realized it, it was too late.”

At 36, Miller is the oldest Alpine medalist in Olympic history. With six medals, he is also the most decorated U.S. Alpine skier of all-time.