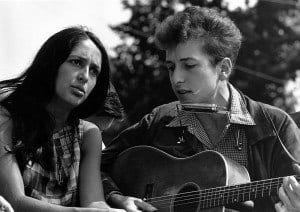 Bob Dylan will be on display for Paris to see in a photo exhibit, along with that Dylan is set to release a new CD collection this year.

Bob Dylan will be honored in a new photo exhibit, located in Paris, and will be releasing a new CD box later this year, according to the Christian Post.

The folk artist will be featured in an exhibition featured at the Cite de la Musique in Paris.

The photographer, Daniel Kramer toured with Dylan for a few years and captured these moments.

The pictures are said to show a less public view of Dylan like him playing chess and walking alone on the sidewalk.

Dylan gained his note-worthy fame as an artist with hits like “Blowin’ in the Win” and “The Times, They Are a-Changin.” In addition to that, his activism has helped make Dylan a household name.

With his music evolving over the years from rock and roll to folk-art, Dylan wrote in notes on his CD set “Biography,” “The thing about rock and roll is that for me anyway it wasn’t enough…the songs weren’t serious or didn’t reflect life in a realistic way.”

Dylan has released over 50 albums, according to his website, spanned from the 1960s to the present.

Dylan is a known supporter of Amnesty International and human rights.

The new CD set, currently has set release date, will have all of Dylan’s music, including un-released tracks. Roger Friedman, music critic for Forbes, said, “The massive box will be a Dylanographer’s delight, collecting every single track.”

Priced around $300 with a code for free downloads, Dylan fans will be ecstatic for this collection.

Dylan is currently on an international tour, scheduled to play in Brazil on April 15.