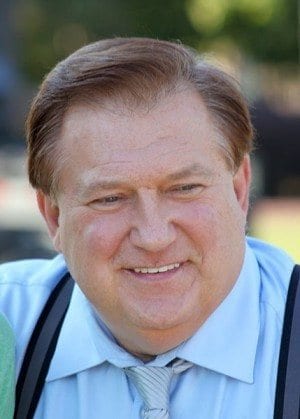 Bob Beckel, FOX Commentator and host of The Five, says he didn’t know he was on the air when he dropped the f-bomb during an appearance on Sean Hannity’s Hannity.

“You don’t know what the fuck you’re talking about,” Bob Beckel said Monday as he defended the federal Head Start program in a heated argument with Tea Party activist Jennnifer Stefano.

“Whoa! Bleep!” Hannity jumped in. “What are you doing?”

Hannity apologized to viewers for the language, but Bob Beckel initially refused to, saying they weren’t on air. Informed that in fact they were, he said he was sorry, but that Hannity should have made it clear to him they were live.

“You should run your show a little better, instead of having me get caught like that,” he said.

After he realized what happened, Bob Beckel had bit of a meltdown, saying he was going to get fired, covering his head in shame and refusing to speak for the rest of the segment. Both Stefano and Neal Boortz tried to comfort him. Boortz by saying, “if they try to fire you, we’ll defend you.”

Bob Beckel took to Twitter to apologize again, saying, “I honestly thought we were off air. I just may not be cut out for the tv business. Peace.” He also thanked his defenders, noting the conservative ones.

On Tuesday’s The Five, he dropped change and then a dollar bill into “Bob’s Swear Jar.”

This is not the first time Beckel has cursed on air. He let the s-word slip back in September 2011, during a heated discussion about then-GOP candidate Herman Cain after  dropping the same word earlier that month during a discussion on tax cuts.