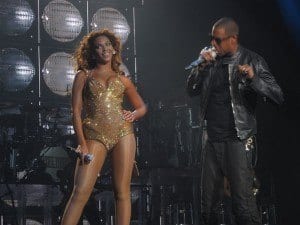 On the day before the birth of Jay-Z and Beyonce’s daughter Blue Ivy, 28 employees were laid off that worked for the Boys and Men’s department of Rocawear. Rocawear was the fashion line created by Jay-Z, but it is now owned by Iconix Group, which is ran by  Real Housewife of New Jersey, Jaqueline Laurita.

The reasons for the layoffs were cited as ‘economic’ and they very well may be. While Jay-Z reportedly still cares about the brand, he is no longer interested in dedicating himself to it or its promotion. Rocawear is also facing a lawsuit, and recently ignited a good amount of controversy by striking the wrong chords of Occupy Wall Street protestors with the $22 ‘Occupy All Streets’ tee shirts. Not only were the shirts said to be “overpriced pieces of cotton” by an Occupy rep, the label also failed to donate any funding to support the movement.

One girl born, 28 fashion overseers of boys and men clothing released. Life is strange like that sometimes.

Read more at the Daily Mail.