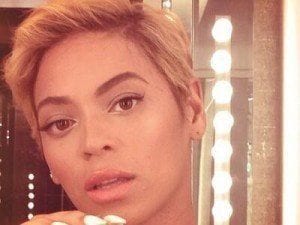 The Beyoncé haircut is only a day old and it has already divided our nation more starkly than any political debate. Why would Beyoncé do this to her luscious locks? Surely there must be some kind of scientific explanation behind the Beyoncé haircut, right?

Damone Roberts, the culprit behind the Beyoncé haircut, believes that this revolutionary do’ will bring change to the world on an unprecedented scale, saying: “I assure you Beyoncé’s new haircut will be the hottest haircut to hit America since Jennifer Aniston’s ‘Rachel’ hairdo.”

Could the Beyoncé haircut have some deeper political meaning? The pixie cut does bear a striking resemblance to Kim Jong-un, the supreme leader of North Korea. It has been a while since we have put our heads between our legs in fear of the manboy with nuclear predilections, so perhaps this is a secret message of support from Mrs. Carter. We must keep our guard up America, if Kim Jong-un can get to Dennis Rodman, isn’t it possible his reach could extend to Beyoncé haircut levels of power?

Maybe I’m looking at this the wrong way; this is Beyoncé after all, and she is like the Miss America of former Destiny’s Child members. Perhaps the pixie cut is not a slight against America at all, but a resounding cheer of support for the stars and stripes.

Recently President Obama decided to cancel his Moscow summit with President Vladimir Putin, for many potential reasons including Russia’s homosexual intolerance and offering Edward Snowden political asylum. Could Beyonce’s pixie cut be a symbol of support for her BFF President?

Then again, it could just be a goddamn haircut.