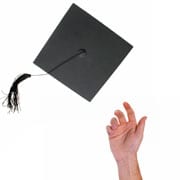 College is expensive, really expensive.  According to CNN,  the average price for a four-year private school education is an astounding $21,235 per year while public universities weigh in at $5,491 per year, and that is not including room and board.  For that price many students, as well as parents, are wondering which major will give them the most bang for their buck.  Fortunately Pay Scale has compiled a list of the top ten best paying college majors, and forget those liberal arts degrees because they are nowhere to be found.  Science majors rule the top ten with seven out of ten being engineering majors. As for the other three majors, well those all require extensive math knowledge.

Petroleum Engineers seek out oil and gas reservoirs beneath the earth’s surface. They develop the safest and most efficient methods of bringing those resources to the surface while working with environmental and economic restraints. Many petroleum engineers travel the world in search of these untapped resources. According to

Texas A&M some courses that a petroleum engineer might take are drilling engineering, reservoir development and geostatistics.

Aerospace Engineers research, design, and develop high-speed vehicles. They can work with a wide variety of vehicles including, aircrafts, spacecrafts, missiles and space stations. Students who choose this major learn about the design and analysis of aeronautical and aerospace vehicles. Currently in the United States there are very few colleges that offer this major. One college that does offer this degree, Illinois Institute of Technology, offers these classes for the major, spacecraft design, thermodynamics and aerospace propulsion.

Chemical engineering majors learn how to change raw materials into usable products. They solve technical problems to create new inventions that impact our daily lives. Chemical engineers develop everything from fibers in clothes to artificial organs for human transplant. According to Massachusetts Institute of Technology, chemical engineers must possess a foundation knowledge in chemistry, biology, physics, and mathematics.  They also will gain knowledge of thermodynamics, transport processes, and chemical kinetics.

Princeton University offers a degree in electrical engineering and they offer courses in computer architecture, cyber security, and physical optics.

Nuclear Engineers work to produce long-term sustainable nuclear energy.  The job market for nuclear engineers is expanding and according to the University of California, Berkeley, students who major in nuclear engineering can get jobs in national laboratories, government and academia.

People who major in applied mathematics have skills that allow them to work in a variety of fields. Mathematicians can work in business, physics, accounting, drafting and design, finance, operations research, engineering and healthcare.

The National Institute of Health defines biomedical engineers as “the application of the life sciences, mathematics and engineering principals to define and solve problems in biology, medicine, healthcare, and other fields.” Recently there has been a great demand for this degree and many colleges are adding this program.

Physics majors study why things work. They attempt to explain how the same idea can apply to different problems and devices. They aim to figure out why things work the way they do, be that black holes or even televisions.  According to Worcester Polytechnic Institute students learn to take a logical, problem-solving approach in whatever situation they might find themselves in. Physicists can work in fields such as engineering, communications, biology and electronics.

Economists research and evaluate data related to anything of monetary or production value. According to the University of Virginia,  students who graduate with an economics degree usually get jobs in business or finance. Many students with economics degrees go on to law school after completing their undergraduate studies.