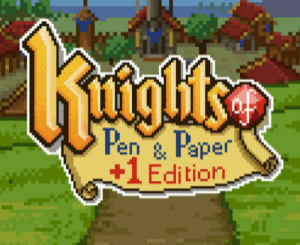 As the popularity of tabletop games like Dungeons & Dragons skyrockets, the folks at Behold Studios and Paradox Interactive have teamed up to present a snarky, digital look at what happens when friends sit down to enjoy some roleplaying. Stereotypes exist for a reason, and while I’ll be the first to say that it’s not simply geeks, nerds, or outcasts that play games like D&D anymore, the stereotypes that you see at the table are represented very well in Knights of Pen & Paper +1 Edition. Available on PC, Android, and iOS, players are taken on a turn-based, roleplaying adventure that takes advantage of all the basic implements of a tabletop game, including the vengeful, sadistic Dungeon Master (the DM) to control the story.

The setting is basic, with a few friends gathering to play their favorite game at the DM’s house. Each player is selected by you, and each come with their own particular passive skill. If you decide to play as the Jock for instance, you receive a +1 bonus to your attack. The Little Brother has improved initiative, and there are 12 other characters to choose from. After that, it’s up to you to decide which class they’ll excel at, with your basics like Mage, Barbarian, or Cleric available. An experienced player will know to group certain characters with particular classes in order to create a well-balanced team, but it’s not as easy as it seems. Each of these, characters and classes, is available to be purchased with in-game gold. And while it’s fairly easy and straightforward to earn the gold needed (you also start with a modest amount), using it to ensure your characters are well-supplied throughout your adventure will quickly deplete your funds.

As you progress through the story, adventuring in different areas and leveling your characters up, you’ll find that you may have need of a character who can heal or one who can deal more damage than you can do now. To obtain the maximum party size — five characters — you’ll need to grind your way to more gold or spend some real money to purchase the fake money. With all the ire about microtransactions though, you may find yourself spending $4.99, the maximum you can spend at one time. That’s because the game is fun.

The 8-bit visuals combined with a midi-like audio aesthetic create an atmosphere akin to the games we played in the 90’s. And while that art style is sometimes used to cover up artistic shortcomings, in this instance it works well. It may be that the narrative and dialogue sequences that play out from the point-of-view of the DM & players is reminiscent of those times when we experienced them first hand, or it may simply be that it’s just well-written. Fact is, the developers at Behold Studios clearly know how to create a turn-based RPG and can do it without taking themselves too seriously.

While it’s available on PC, the mobile versions of the game seem to fit more with the overall feel. There are few differences between versions, at least in play style, but the touch screen is more suited to selecting quests, upgrading characters as they gain levels, and maintains the humorous tone a bit more easily. With a price of $9.99 on PC and only $2.99 on Android and iOS, those looking for an enjoyable, humorous look into the world of tabletop gaming will find it here.