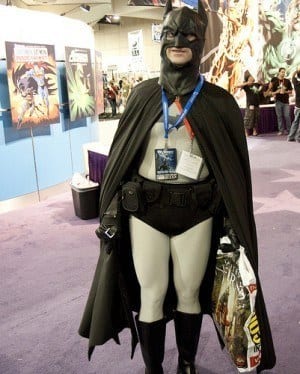 A man dressed as Batman was arrested this weekend in Michigan

Batman, yes, Batman was charged with obstructing a police investigation in Northern Michigan this weekend. Police were in the process of searching for a man in Petoskey, Michigan when the 33-year-old man, Mark Wayne Williams (Batman) decided to help with the search.

Officers proceeded to ask Williams to leave the scene but in true Batman style, he insisted on helping the police find their criminal. According to State Police Sgt. Jeff Gorno, “He wouldn’t clear the scene, and we had a canine out there and he kept screwing up the scent…He said he wanted to help us look for the driver…We didn’t want the dog to track Batman instead of the accident scene, and he was getting in the way of officers who had a job to do.”

Although Batman didn’t pose any real threat to the officers, he was still considered an annoyance. Officers finally confiscated his costume and charged him with obstructing a police investigation and resisting arrest. Williams posted bond and was released from the county jail. He’s due back in court on October 18.

Shockingly enough, this isn’t the first time that Williams has been arrested for pretending to be Batman. He was previously caught dressed as Batman on the roof of a Petoskey business with a baton-type weapon, a can of chemical irritant spray and a pair of sand-filled gloves. He was sentenced to six months of probation and was forbidden to wear costumes. But that didn’t stop him from doing it again.

Williams claimed he meant no harm to anyone. He is the hero Petoskey, Michigan deserves, but not the one it needs right now.