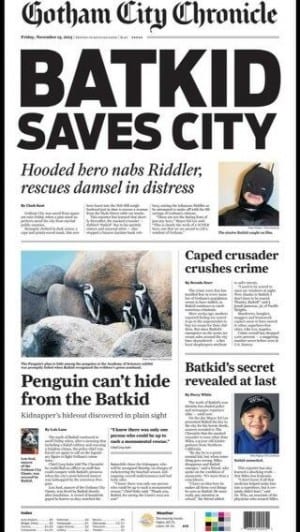 If you haven’t heard about Batkid by now – whether by social media, TV or word-of-mouth – you may have been sleeping all day or you live somewhere like Japan. So first off I’ll say this: good morning and/or konnichiwa; I hope you feel well-rested.

Batkid of course refers to 5-year-old Miles Scott, from Tulelake California, who has been fighting the battle against leukemia since he was 18 months old. Today, Miles got the opportunity to put on the cape and cowl and become a pint-sized Batman: Batkid. The entire city of San Francisco was transformed into a real-life Gotham City as well.

Like many children, (and let’s face it, pretty much the rest of us) Miles had grown to love superheroes and their constant struggle to fight for justice and beat the bad guy.

“Miles has always been a fighter,” his dad Nick Scott told the San Francisco Chronicle. “He fought through cancer and he beat that. I think it goes hand in hand that he’s a fan of Batman and superheroes, as well.”

San Francisco’s Make-A-Wish foundation asked Miles what he wanted more than anything. His answer? “I wish to be Batkid.” And so, the plan was hatched to turn the city of San Francisco into a real-world version of Batman’s own Gotham City.

Batkid’s adventure could have been something as minute as riding along in a Batmobile, but Miles’ dream-come-true was a child’s game of make-believe turned into a reality. The Batkid craze extended to the citizens of the temporary Gotham City, its police force and local government, and even President Obama himself.

Make-A-Wish teamed up with social marketing company Clever Girls Collective and laid out a whole day of events for the Batkid Miles. Batkid received an urgent message from San Francisco’s Police Chief Greg Suhr. Suhr needed Batkid to save the city from Batman rogues The Penguin and The Riddler.

With Miles’ baby brother dressed as Robin, Batkid set off with an adult Batman in two Lamborghini Batmobiles. The dynamic duo (plus 1) raced to save a damsel-in-distress from a ticking time bomb and an oncoming cable car. Next he prevented The Riddler from robbing a bank and apprehended the questioning criminal.

Batman and Batkid took a lunch break at San Francisco’s Burger Bar before heading back out to stop another criminal: The Penguin. It turns out that The Penguin had kidnapped San Francisco Giants’ mascot Lou Seal. Batkid and Batman confronted The Penguin at the ballpark, before the vile villain begged for mercy and the grateful Lou was freed.

The end of the day saw Batkid gracing City Hall with his presence. Mayor Ed Lee gave young Miles a (chocolate) key to the city, thanking him for his hard work. The Justice department even released an indictment against The Riddler and The Penguin, which praised Miles as well. It read:

“Because even if you get out of jail someday, you will never succeed in your criminal actions as long as Miles, aka ‘Batman,’ aka ‘Batkid’ is looking out for the citizens of Gotham.”

The San Francisco Chronicle made a specialized “Gotham City Chronicle” in honor of Batkid and his special day. The headline read “Batkid Saves City,” and the article itself was written by Superman alter ego Clark Kent. President Obama later sent out a Vine video thanking Batkid for his super heroics.

Having ended his treatments in June, Miles’ leukemia is now in remission. Nick Scott thanked the Make-A-Wish Foundation for all of their help, as well as the people of San Francisco who cheered Miles on. The feel-good event was attended by around 7,000 people.

“All the doctors, nurses and all the other parents that have to deal with the same thing we’re going through. I hope they get a conclusion to their illnesses like we’re getting,” Nick Scott said to KGO-TV.

Yes, this happened, and yes, it is awesome. Score one for the human race.