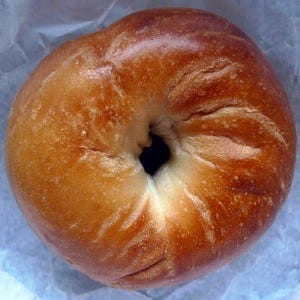 Bagel head sounds like it should be some kind of playground insult among elementary schoolers, but it’s actually a cosmetic fad in Japan. The process of bagel-heading involves injecting saline solution into the skin on your forehead, then pressing down the middle with a thumb or finger. The end result? You look like you have a bagel on your head.

“Sweet, buttery bagels,” one young man said of the procedure on an episode of the National Geographic Channel’s Taboo. “I look delicious.”

The bagel head body modification has been popular since at least 2008 among young people in Tokyo who are feeling rebellious, and it came to international attention on the Sept. 23 episode of Taboo. The process itself is described on the show as “relaxing,” accompanied by a stinging, dripping feeling as well as a sensation of falling asleep. The bagel head effect only lasts about 16 hours or so, by which point the body absorbs the 13.5 ounces of saline that have been injected into the skin.

Which raises the question: Is your body OK with that much saline entering your body through your forehead?

Omar Ibrahimi, a dermatologist at the Connecticut Skin Institute, spoke to Fox News about the potential dangers of the bagel head fad. He said that saline solution is actually commonly used as a local anesthetic, but too much of it—especially if it’s a highly concentrated solution—can cause extreme dehydration. He said it’s similar to the effect of drinking saltwater.

Other dangers include the risks of infection from non-sterile saline, as well as the risk that your skin might become permanently stretched from the bagel head procedure.

Remember what your mother told you? “Someday, your face is going to stick like that.”