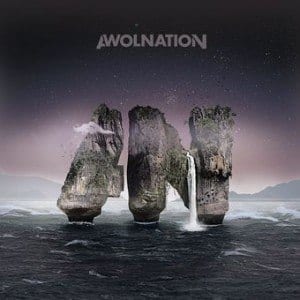 
It has been said that when Elvis Presley was being shot from the waist up on “The Ed Sullivan Show,” AWOL was ready to pull the plug. Others say it was the Rolling Stones nightmare at Altamont that pushed AWOL to ask Sex Pistols fans if they felt they were being cheated at their last show in San Francisco. When Madonna writhed around the stage at the MTV Video Music Awards singing “Like a Virgin,” AWOL was spotted in scrubs trying to save Bushwick Bill’s eyeball, before being last seen pushing Kurt Cobain onstage in a wheelchair to play Reading…

With a bio like that, it’s only fitting to expect great things from AWOLNATION’s “Megalithic Symphony,” and Aaron Bruno’s solo project definitely delivers that. “Megalithic Symphony” is an amalgam of electronic, hip-hop, indie and pop sensibilities, rolled into a genre that is it’s own creation. The 14 tracks vary in tone and sound to create an experience that is unlike what any other band is doing right now. The album’s first single, “Sail,” went gold in Canada, winning listeners over with its dark electronic beats and Bruno’s rough grunge-esque vocals. “Blame it on my A.D.D., baby,” Bruno sings in “Sail” and maybe it’s this A.D.D. that accounts for the variety of songs and styles he presents on “Symphony.”

Surprisingly, despite the variety of sounds and styles represented, the album doesn’t come off as disjointed at all. The epic “Knights of Shame” seems to encompass every genre while Bruno urges us to “Dance, baby, dance ’cause the world is ending.” At times Bruno’s voice takes on the qualities of John Lennon (“All I Need”) and at other times it is reminiscent of Mika (“People”). Even the spoken word “Some Sort of Creature,” though odd, adds to the overall feel that Bruno is establishing. And I will unabashedly admit that “Guilty Filthy Soul” had me groovin’ in my seat.

All in all, “Megalithic Symphony” is a fantastic first effort for AWOLNATION. Bruno has created an all-encompassing sound like none other, and I predict that they will soon be a force to be reckoned with.

Like what you hear? You can buy the album here and you can get the single “Sail” from iTunes. And you can download an exclusive LIVE version of “Sail” for FREE right here!

Keep up with AWOLNATION online on Facebook and the official site.