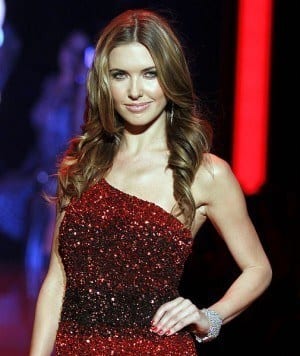 After being away from the limelight and the end of final season’s end of The Hills, Audrina Patridge reminds the public who she is by posing in a black and white bikini.

According to WebProNews, Audrina Patridge was at a Foxwoods Resort Casino’s ‘Liquid Sundays’ pool party when she decided to show of her far from flawed bikini body this weekend.

Having grown up in the Laguna Beach, Calif, Patridge said, “I don’t even think twice about wearing a swimsuit because it’s always been a part of my lifestyle,” adding, “But I have girlfriends who are so afraid to show their bodies. They won’t take off their towels at the beach or pool. It’s a shame because everyone can look good in a suit.”

But, she was also seen wearing a casual, classic outfit to a Hollywood birthday party at Chateau Marmont. According to Omg! Audrine Patridge was wearing black coated black jeans, black paten kitten heals and a white shirt that read “California.”

Omg! claimed her lax birthday outfit to be patriotic toward her state.

Audrina Patridge also had some fitness tips to share. According to International Business Times, the former reality television star first advised that people be open-minded. Though a bikini may suit a celebrity, that does not mean that the same bikini will flatter others’ figures.

Audrina Patridge’s trainer, Jarett DelBene, explained what the body box is. “We alternate rounds of boxing combinations that include punches and kicks with circuits of body weight-only strength moves,” adding, “It’s high intensity, so you burn lots of calories while you’re firming up. And because the exercises don’t use any gear, Patridge can stick to them whether she’s on the road or at home.”