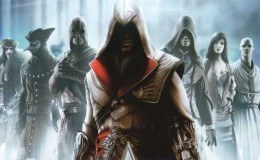 Taking back Italy, one assassination at a time

The original “Assassin’s Creed” was a disappointing culmination of misleading hype and sloppily executed gameplay mechanics, but its follow up game, “Assassin’s Creed II”, managed to rectify virtually every grievance critics had about the original and deliver a sleek, stylish action title that made the exploits of Ezio, a nobleman turned assassin in Renaissance Italy, one of the most memorable and enjoyable surprises of 2009. The latest installment in the series, “Assassin’s Creed: Brotherhood”, continues Ezio’s quest for revenge against the Templars, an evil organization that murdered his family, and while it’s more of an expansion pack than a true sequel, the game continues to establish the “Assassin’s Creed” franchise as one of the most prominent in the industry.

“Brotherhood” takes place shortly after the events of “Assassin’s Creed II” with Ezio having to regather and regroup after a surprise attack on Monteriggioni severely cripples his campaign of vengeance. The story is still as riveting and gripping as the original, full of mustache twirling villains and sympathetic heroes, but unfortunately it also deviates periodically to focus on Desmond, Ezio’s ancestor who relives Ezio’s memories through a machine called the Animus. This additional component of the story is as uninteresting as it was in the first two games and amounts to little more than an annoying distraction that hampers the momentum of an otherwise excellently executed plot. Still, by now you’re probably expecting the inevitable break from kicking ass as an assassin to listen to a group of characters ramble on about stuff you really don’t care very much about, but it’s still a nuisance; albeit a necessary one I suppose.

If you played “Assassin’s Creed 2”, a great deal of “Brotherhood” will be instantly familiar. The combat mechanics are largely the same, and you still have the option to take on myriad side quests that will help you expand your operations in Rome. The world is open for the most part (some parts need unlocking through story progression), and it’s still nothing short of amazing how Ubisoft has transformed the Renaissance time period into such an immersive, dynamic setting. Nimbly hopping from one rooftop will still be your primary means of getting about (though your horse can actually be brought into the city now and plays a much bigger role both in transportation and combat), and your means of dispatching guards or eluding pursuers is more or less unchanged.

“Brotherhood” adheres to a “if-it’s-not-broken-don’t-fix-it” mentality in regards to its core gameplay mechanics, but that’s not to suggest that there’s not a wealth of new features that have been seamlessly integrated as well. The most prominent is the Borgia towers, a series of structures that Ezio needs to burn down before he can liberate its surrounding district. Once you assassinate the Borgia’s captain and raze the tower to the ground, you’ll be able to renovate blacksmiths, banks, tailors, etc. which will supply you with better equipment or allow you to accrue greater wealth. It adds a new level of depth to a game that used to be a pure action title that is oddly reminiscent of some of the features we most recently saw in “Fable III”.

The other is the ability to recruit assassins. While you could hire mercenaries in “Assassin’s Creed II”, in “Brotherhood” you can actually manage a stable of assassins who you can summon on the battlefield or send on assignments to gain experience. Having allies in combat is a huge asset, particularly since you’re almost always outnumbered. Dropping down from rooftops and stabbing someone in the head is always fun, but being able to walk down the street with an entourage of assassins at your back has its own unique appeal as well.

Some of the other changes made in “Brotherhood” are more subtle but still noteworthy. Ezio has a few new toys to play with, scaling walls is made more difficult with less obvious hand holds to guide you, and you’ll even notice some tweaks made to the combat that makes dealing death more brutal and satisfying. Waiting for your opponents to attack and countering is still the name of the game, and while killing guards still isn’t as realistic as it should be due to lackluster AI, watching Ezio dispatch foes with a knife to the throat or a bullet to the brain is always rewarding in a morbid sort of way.

Where “Brotherhood” truly shines is in its multiplayer. At the risk of extreme hyperbole, no game has ever done what “Brotherhood” does. You don the guise of an assassin, and it’s your job to either elude detection, hunt down prey or engage in an intense game of free-for-all against rival agents depending on which of the game’s four modes you choose. Each multiplayer session is incredibly tense and will constantly keep you on edge. Every player looks like one of the dozens of civilians walking about, so you always need to keep an eye out for suspicious behavior. On the other hand, drawing your weapon and engaging in a brawl in the middle of the street is a terrific way to attract the attention of every other nearby assassin who will instantly be looking to dispatch the victor once the smoke clears.

Succeeding in “Brotherhood” is less about twitch reflexes and camping and more about being observant and being sneaky. It’s one of the few games out there that seem to truly reward skill and teamwork rather than mindless running and gunning.

“Assassin’s Creed: Brotherhood” might not be the “Assassin’s Creed III” that some might have been hoping for, but it’s an excellent addition to the franchise that takes everything that made “Assassin’s Creed II”, such a popular hit last year, and expands on it. The new features accommodate the preexisting gameplay perfectly, the multiplayer mode is as addicting as it is thrilling, and Ezio’s adventure (minus the tedious deviations into modern day) does a fantastic job of making players feel emotionally invested in the action.