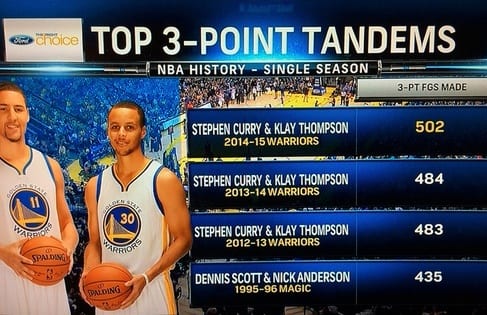 Now that the young NBA season has gotten off to a rapid start, we can see who the better teams are in the league and it raises the question: Are the Golden State Warriors really this good? We also know who look like the spot fillers for the elite to step over as they pursue the NBA title. It has been one of those astounding seasons to remember for the defending champions and even more amazing is the play of MVP Stephen Curry. They have started the season 15-0 defeating teams in numerous ways with the leadership and dynamic play by their point guard.

Curry has lead the way with stats that are only rivaled by the likes of Michael Jordan. He has been able to come out of the gate smoking hot hitting 51% of his field goals and shooting 44% from behind the 3 point line. Offensively Curry has stepped the level of his game up tremendously adding even more accuracy to his arsenal. Along with the better shooting he is playing tough defense that has helped in this historic start for the team. Although Curry has been a big piece of the puzzle, the Luke Walton led team has other players that may be the reason for the greatest team of all time comparisons.

You should also read: NBA Trade by Draft Picks

The Impact of the Others

The “Others” are the players that compliment Steph Curry and All-Star shooting guard Klay Thompson. One of the biggest threats to any team is Draymond Green. Draymond has brought a competitive edge to the Warriors that has honestly been a defining factor in their championship run. The Michigan State alumni is particularly important on the defensive end his ability to cover space and guard multiple positions successfully allows for Curry to initiate his tough off the ball defense. This formula causes turn overs and fast breaks that allow the sharpshooting warriors team to capitalize. Trust me when I say they know how to capitalize.

They capitalize by playing a very organized style of basketball. They lead the league in assist per game as well as Field Goal percentage per game. These 2 stats alone make them hard to handle. When you pass the ball and utilize the whole court to your advantage you will get open shots and the Warriors have mastered the ability to knock down the open shot. Taking care of the ball and making the extra pass has put them in the conversation with the Bulls team that went 72-10 with MJ and Scottie Pippen leading the way.

Are the comparisons Fair?

We are only 15 games into the season and the normal wear and tear of the year has yet to hit the warriors, while several other teams are waiting for the return of some key players to their lineups. This doesn’t necessarily mean they would have been able to beat them either way but it is something to talk about. Health is a vital part of a championship run. Ask the cavaliers how they feel about Kyrie Irving getting hurt in the first game of the NBA finals last year. The warriors have been able to stay away from the injury bug for the most part keeping their winning ways going. A team that has played together for several years and one that possess the talent to be mentioned with the great teams in history. I do not have a problem with the comparisons because at this point it doesn’t look like there is a team in the league that will be able to beat the Warriors 4 times in a series.

They look prime to repeat as NBA champions. I am unsure if they can win more than 72 games or even tie that record but I do see them coming close. They only lost 15 games last year and with the MVP playing in such a legendary way the sky is truly the limit. If you ask me the Warriors are really that good. What do you think about the Golden State Warriors so far? Are they ready to win another championship? Are they as good as the Jordan 72-10 team? Leave a comment and let me know what you think: Are the Golden State Warriors really this good?