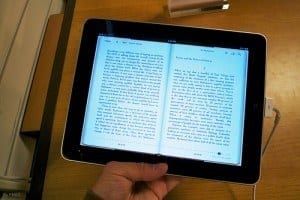 Apple’s announcement on Thursday may have signalled a major change in the academic world.

“There’s a lot that’s talked about that may be wrong with education. One thing we hear louder than all else and where we can help is in student engagement,” said Phil Schiller, Apple’s marketing chief, during the Apple announcement. “That’s why we get excited when students get their hands on an iPad.”

The new digital books would cost $14.99 and would allow students to mark them up just like a normal textbook. Reportedly, Apple is forming partnerships with Pearson, McGraw-Hill and Houghton Mifflin Harcourt, which are responsible for 90 percent of the textbooks used in the U.S. today.