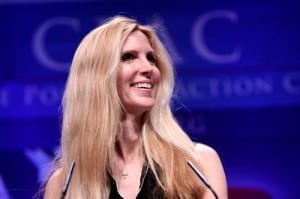 Ann Coulter has stated that the Democratic Party is moving away from their focus on blacks and onto the Hispanics. Both parties have been vying for the Latino vote for the upcoming November election, and conservative Coulter says they are abandoning African Americans and their civil rights.

Ann Coulter said Sunday during a roundtable discussion on ’s “This Week With George Stephanopoulos” that “Democrats are dropping the blacks and moving on to the Hispanics” and also argued that immigration rights are not necessarily civil rights. John Ramos, another member of the roundtable discussion, commented that the Republicans need to focus on immigration and Hispanics because it is such an enormous issue and population in the nation, thus the Coulter comment. According to her, the Democrats are moving on the Latinos because “they’re a larger group.”

Author of her new book “Mugged: Racial Demagoguery From the Seventies to Obama,” Ann Coulter also argued that the black civil rights experience is being assumed by many groups on the left.

“I think what—the way liberals have treated blacks like children and many of their policies have been harmful to blacks, at least they got the beneficiary group right,” she said. “There is the legacy of slavery and Jim Crow laws. We don’t owe the homeless. We don’t owe feminists. We don’t owe women who are desirous of having abortions, but that’s—or – or gays who want to get married to one another. That’s what civil rights has become for much on the left.”

She maintains that civil rights belong only to the blacks. Continuing on the rant against liberals, Coulter claimed that all liberals want to talk about it racism, and “white guilt” is harming the society. Hannity chimed in saying Democrats are avoiding other important issues “because all they can do is accuse Republicans of racism.”

“Everyone, blacks especially, are better off when the white guilt bank is shut down, as it was for more than a decade after the O.J. verdict,” Coulter says. “And liberals kept trying to push the racial narrative in their newspapers and TV. Americans weren’t buying it.”