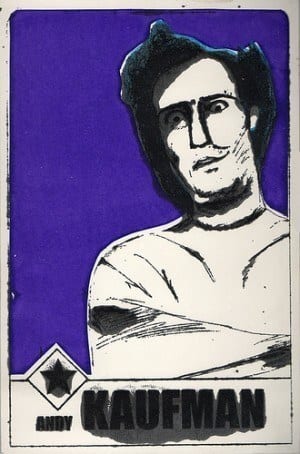 Andy Kaufman may be hiding out in the same cave that Tupac is in. The famous comedian most notable for his role on the 70’s sitcom Taxi, died from lung cancer back in 1984, but now reports are surfacing that the comedian faked his own death.

Andy Kaufman’s brother, Michael Kaufman took to the stage during the 9th annual Andy Kaufman awards to reveal that in 1999 he discovered in an essay from his brother that described a perfectly crafted plan to fake his own death.

The essay also gave detailed instructions for his brother to meet him at his favorite restaurant where a table was saved under one of his pseudonyms. Andy Kaufman was suppose to make an appearance at this restaurant, but instead one of the waitresses handed Michael a letter that said Andy had went into hiding and had wanted a normal life. The letter also noted that he had fallen in love and had a daughter.

After disclosing all of this information to a justifiably appalled crowd, Michael Kaufman then brought the alleged daughter on stage, who is now 24 and contacted Michael a few months ago. The woman then addressed the audience and gave a small speech where she explained that her father was a stay-a -home dad and he was going to come out of hiding after 29 years, but then ultimately decided not to.

The comedian is known for being a prankster, inspiring many comedians including Sacha Baren Cohen. What is really chilling is that Andy Kaufman has spoken about faking his own death before it was announced that he had died.

There is a copy of his death certificate that can be viewed online, and it is noted that the star died from renal failure at age 35. However, many people are saying this isn’t a hoax. “I witnessed the entire thing and I can tell you without a doubt this was not a prank,” said the producer of the award show and Andy’s good friend Al Parinello.

Even audience members explained how they couldn’t contain their composure through this bizarre revelation. An audience member posted to Facebook explaining how warped and surreal the moment was for everyone who witnessed it. “As much as this seems like bullshit as I type it, it was as real as anything I’ve ever seen. There is a video. It was chilling, upsetting and absolutely intriguing. I bawled my eyes out. The entire room was freaked out.”

An audience member also told Sean L. McCarthy of The Comic’s Comic that they knew the alleged daughter was a theater major, but had never met her father.

So what do you think? Do you think this is another elaborate, albeit disturbing prank done from the grave of Andy Kaufman? Or do you think he can possibly still be alive? Check out the video of the daughter in question giving the emotional speech at the Andy Kaufman Awards HERE.